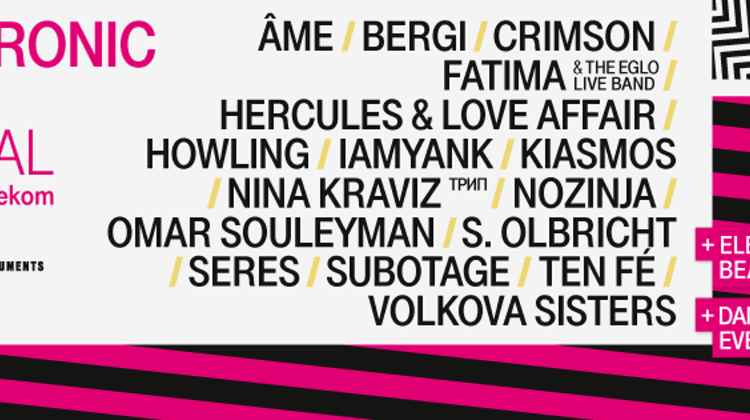 Press release: We interrupt our regular festival season to bring you this important newsflash — Electronic Beats Festival is coming out of the concert halls and into the clubs and special locations all across town!

Beginning in September, we’re bringing the new Electronic Beats City Festival to four different cities—Podgorica, Bucharest, Budapest and Zagreb—each offering 48 hours of a multi-venue, multi-genre experiences comprised of artists and DJs from around the world. Dates are listed below, and ticket information, locations and lineups will be announced shortly; stay tuned!

At half past midnight, we're heading to the Akvarium nightclub for a headlining set from the inimitable Siberian DJ Nina Kraviz. A few local heroes will open and close the night: NVC's Subotage will warm up and S. Olbricht will shut it down. Olbricht, a former EB Radio contributor, is an important figure in the local scene both as the founder of one of the cities' most famous labels, Farbwechsel, and as a member of the Lobster Theremin label roster.

We're starting EB Festival Budapest 2015 at the ship-turned-venue A38 at 20:00 with the Volkova Sisters, a London-based duo that formed in Budapest. They'll warm up for Fatima, the so-called "soul queen" of Floating Points' Eglo label, and her live ensemble. The headlining acts are both past EB Festival alumni: Syrian wedding singer Omar Souleyman, whose music has become a popular global export thanks to releases on Modeselektor's Monkeytown label, and Hercules & Love Affair, the DFA-affiliated disco-house revivalists led by charismatic frontman Andy Butler.

After an appearance at A38 on October 17, Howling member Frank Wiedemann will return later that night at Akvarium alongside the constituents of his other highly-successful music project: Âme, his equally emotive dance floor collaboration with Kristian Beyer. Opening duties will fall to Budapest's own Iamyank and Kiasmos, the project of minimalist Icelandic composer Ólafur Arnalds and Janus Rasmussen. But before Akvarium opens at midnight, we'll be in its little hall for a workshop with Native Instruments from 18:00 to 20:00.

Day 2 of EB's Budapest festival kicks off at A38 on Saturday, October 17 at 20:00 with TMTS graduates Ten Fé, who will also join us in Podgorica and Bucharest. Nozinja will bring the frenetic sounds of Shangaan Electro to the stage before we hand things over to one of our all-around favorite acts, Howling. The Innervisions-signed duo of Ry X and Frank Wiedemann have contributed to every arm of the Electronic Beats operation: they've filed a mix for our radio station, filled out the most recent Counting With questionnaire in the magazine, starred in Slices and played a live gig, toured with us and played at the EB Festival in Cologne earlier this year. In between acts, local artist Seres will keep us entertained.