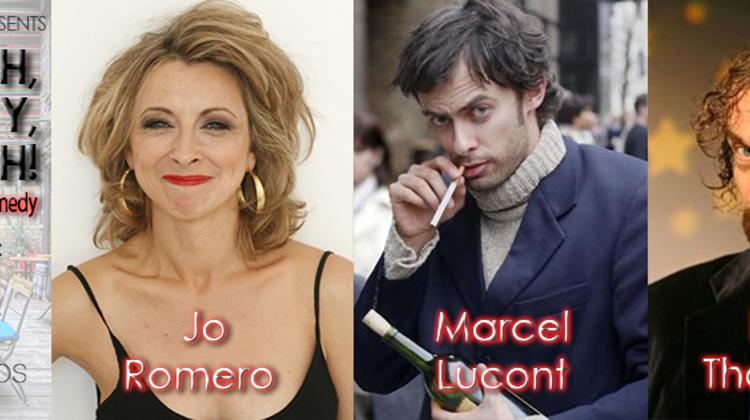 Give your laughing gear a workout with a healthy dose of English humour featuring the return of regular host Dave Thompson and international comedians Jo Romero and Marcel Lucont.

Marcel Lucont has created a French caricature of almost cartoon-like simplicity: the brooding, arrogant poseur in regulation black polo-neck, swigging red wine yet barely able to muster enough energy for a Gallic shrug. Funny foreigners have always been an easy route to laughs, and the main advantage of this suavely conceited persona is that it allows him to adopt a laid-back rhythm and an aloof cadence to give an extra lift to his material.

Jo is an accomplished, unique, warm and likeable stand-up comedian. She began performing stand up in 2001 and was finalist in the Wilkinson Sword Cutting Edge of Comedy award, semi-finalist in the BBC New Comedy Awards, and Daily Telegraph New comedian of the year. Jo is also an accomplished actor and writer and has starred in several prestigious Comedians Theatre plays. Between 2011 and 2014 she performed her own solo show ‘Touched for the Very First Time’ to critical acclaim at UK festivals.

“Wonderful French wit…A pitch-perfect performance…Superb stuff.” – Time Out
“Romero will surely be a force to be reckoned with.” – Chortle
“Dave is one of the finest joke writers in the country” – Time Out

Tickets must be purchased in advance – contact Jodie by clicking here with enquiries
2.500 HUF per person for members | 3.500 HUF for guests