The Budapest Times: Charities Benefit By HUF 2.7 Million From Expatriates 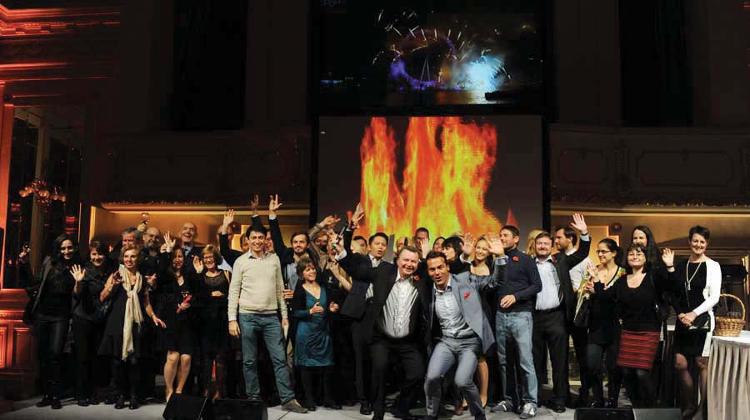 Exactly HUF 2.7 million was raised by 250-plus expatriates and locals at XpatLoop.com’s Annual Party for Charity last week, held in the Corinthia Hotel Budapest’s historic ballroom. The Bonfire Night event featured plenty of refreshments, live music, exotic dancers, a laser show, virtual bonfire and fireworks. It was the 15th birthday celebration of Hungary’s most popular portal for Xpats, and the biggest success so far.

Dennis Diokno, the managing director of FirstMed and the event’s main sponsor for many years, told the organisers: “You pulled off another fantastic evening for both sponsors and guests. This event easily topped the last two. I’m especially happy with the amount raised for charity. I hope we can raise even more next year.”

Anne Zwack, the guest of honour who “set light” to the virtual bonfire as part of the “5th of November Fireworks Night”’ theme, added: “What a stunning result. It makes me feel warm inside, also to see so many people having so much fun.”
Emese Danks of UNICEF, Andreas Vogler of All Nationals Lions Club Budapest and Éva Patzauer of Csodalámpa Foundation all spoke on behalf of their charities.

They were introduced by master of ceremonies Gábor Herendi.

Corinthia Hotel Budapest manager Szabolcs Szabo spoke about his expat experiences, and Stephen Linfitt, the founder of XpatLoop.com and organiser of the event, thanked guests and sponsors for all their contributions.

Hungarian craft beers from Marionett and Élesztő, single malts from Whiskynet, a wide range of premium pálinka from Sándor Zwack’s Nobel range and Clearwater were served, plus tea and coffee provided by the hotel.

Eva Patzauer of beneficiary Csodalámpa Foundation said: “The evening was gorgeous. Iit gets even better and better from year to year.”

Three photo galleries of the event are online at XpatLoop.com/gallery for everyone to see who was there and what happened.