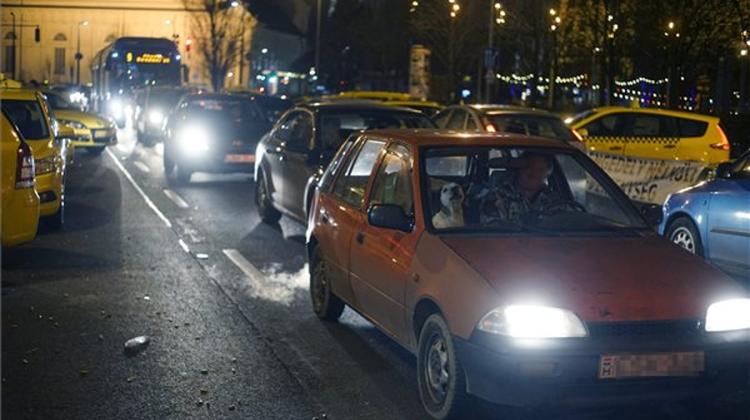 Cabbies partially blocked a major downtown intersection on Monday in the Hungarian capital to protest against Uber – but ran into opposition from angry drivers and commentators.

At first glance, protesting cab drivers are right, writes Népszava’s analyst, reminding readers that cab drivers and taxi companies have to abide by strict and costly regulations issued by the Budapest municipality in 2013. These prescribe a mandatory yellow colour for all taxis, a mobile credit card terminal and the required technical condition of a cab.

They also limited competition by fixing prices. (None of these rules seem to apply to the drivers of Uber, a successful but internationally controversial transport system based on a mobile app.) Népszava, which is otherwise proud of its Social Democratic heritage, calls protesting cab drivers ‘latter day Luddites’, who ask “the anti-competition and anti-market minded state to prohibit each new shoot of capitalism, which should in fact be exploited instead.”

On Index, one of Hungary’s biggest online news sites, Márton Kárpáti scorns cab drivers for lobbying for stricter, more bureaucratic rules and fixed prices rather than adapting to the market. Index considers the the best solution would be for everyone to decide freely what services they offer and use. Regular cabs in outstanding technical condition, with fixed fares and drivers wearing formal attire, would be the ideal.

They should not be burdened by heavy-handed bureaucracy, and if someone chooses to travel with them, then so be it. And there should be alternative solutions like Uber, with cars in more eclectic condition, with less skilful drivers and cheaper fares as well, Index suggests.

On Kettős Mérce, a leading opinion blog, András Jámbor disagrees. The problem is more complex, he warns, than most of the newspaper pundits would like us to see: we cannot call a market free if one has to pay a lot to offer a service (for a cab driver exam, and painting the car yellow, etc.) while others pay nothing.

Also, it is simply unfair to tell cab drivers to stop whining and enroll as Uber drivers: for them that would mean leaving all their investments behind. Jámbor also deems it necessary to distinguish between cab drivers and taxi companies. (The latter were lobbying for these strict rules for their own good). In a final note, he mentions those politicians who voted for these regulations and who are responsible for the current situation.