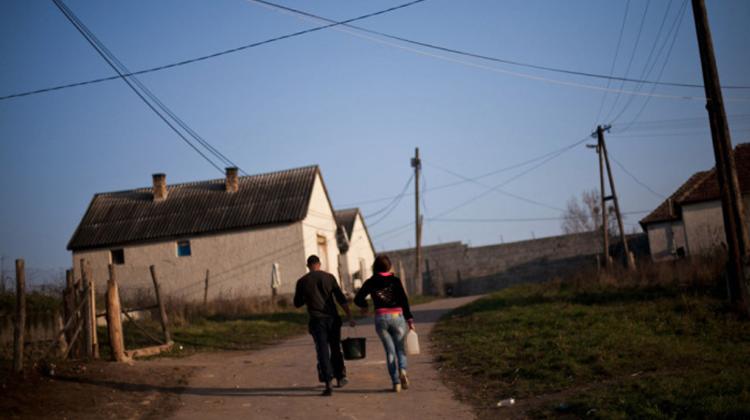 2015 brought many changes to Hungary’s social welfare system. From March 2015 needy families now receive far less social assistance than before. A number of programs were eliminated. In their place, local governments can offer so-called “settlement assistance”, but who receives how much is now entirely left up to the local governments.

Debt management assistance. This was an entitlement program until March of last year. Local governments must now decide who receives it and who does not. Previously, the amount could be used to settle household debt such as utility costs, communal costs and rent or to service mortgage loans. In order to qualify for it, recipients had to be at least six months behind in their payments and their arrears had to amount to at least HUF 50,000 (US 175). Households whose public utilities had been cut off also qualified.

Household maintenance support: This amount was available to households whose members did not exceed HUF 71,000 a month and had no assets. In addition, those with substantial debts could also receive it. The support ranged from HUF 2,500 (USD 9) a month to as much as 30 percent of total household expenses in the case of those worse off.

Kindergarten support: This ended in September of 2015. It helped disadvantaged children attend kindergarten up to the age of 5. The amount was paid out twice a year in one HUF 20,000 (USD 70) and one HUF 10,000 (USD 35) installment.

Public health support: Those families received it where the per capita income was less than HUF 43,000 (USD 151) per month. Those entitled received up to HUF 12,000 (USD 42) from the Social Insurance Fund (TB) with which to purchase medicine plus an extra annual support of HUF 6,000 (USD 21).

Regular social assistance was not completely done away with but was substantially decreased. The amount may no longer exceed HUF 46,000 (USD 160) per month. From March those unable to perform public work are disqualified, as are those who receive other kinds of assistance from the local government. Policy Agenda calculated that 60-65 percent of those who previously qualified no longer did so after the changes were implemented.

Public childcare underwent a major change at the beginning of 2016. There are now four types of care. Previously settlements with populations over 10,000 were required to maintain a public nursery school. However, this has changed so that now only those settlements are required to maintain a nursery school where there are more than 40 children under the age of three, or where there are at least five children whose parents require this service.

Children feeding programs also underwent changes. Local governments can continue to apply to the national government for funds with which to provide free school lunches. However, from 2016 the plan is for the local governments to be required to solve this problem themselves, not merely in summer but during school breaks. Not only children enrolled in nursery school or kindergartens but needy children at home may also participate in free feeding programs during school breaks. In fact, they needn’t even go to the school cafeteria. If necessary, local governments will deliver the food to the families. On paper, at least.

Household support: This kind of social support is important to impoverished, mostly elderly people who are no longer able to care for themselves on their own or perform daily routines, such as taking medicine, cleaning, paying bills, washing up, or cooking. A few hours of help each day enables them to remain in their homes rather than be institutionalized. According to Central Office of Statistics (KSH) data for 2013 altogether 131,791 people benefited from this program.

The way it now works is that local governments are responsible for ensuring that those who request this help qualify as needy. The state gives a fixed amount (normative) per qualified beneficiary per day which the local government may also supplement. Whether the local government asks the beneficiaries to contribute something towards the cost of providing the service can vary from place to place.

Modifications made over the course of 2015 mean that only those living alone with monthly incomes less than HUF 71,250 (USD 246) qualify for the assistance. In the case of married couples the maximum income either person can have in order to qualify for this assistance is around HUF 57,000 (USD 196.5).