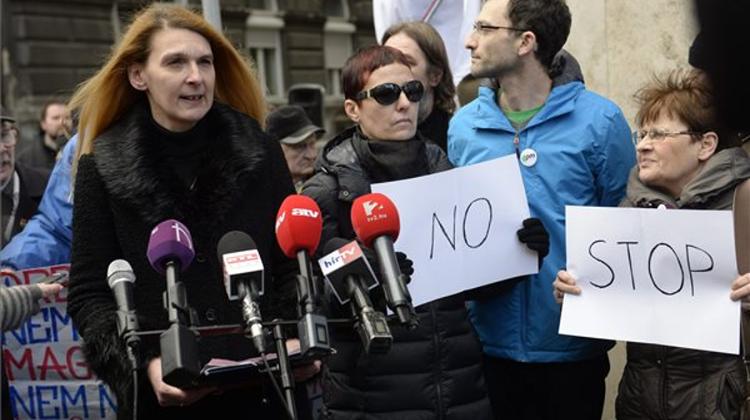 Commenting on a foiled initiative to unveil the bust of a pre-war right-wing politician, left-wing commentators accuse the government of indulging in a cult of racist personalities. Their pro-government counterpart denies the allegation that György Donáth was an anti-Semite, while an independent conservative author calls on the opposing sides to show more tolerance towards each other.

György Donáth was the main defendant at the first Moscow-style show trial in Hungary in 1947, and was sentenced to death and executed on the baseless charge of organising a ‘fascist takeover’. His co-defendants were moderate and anti-Nazi conservatives who were members of a secret society founded in 1920 to ‘promote the national interest’, with strong ethno-nationalist prejudices against both Jews and Germans.

Donáth was a leading official of the governing party during World War Two. As an MP, he is on the record as having made at least three anti-Semitic remarks, but opposed the Nazi invasion in 1944. After the war his secret organisation, the ‘Community of Hungarians’ supported the Smallholders’ Party which united most anti-Communist forces and won the first post-war elections with 57 per cent of the popular vote.

His statue was due to be unveiled on the Remembrance Day for the Victims of Communism last Wednesday 24 February, but the ceremony was interrupted by a group of protesters. The bust was removed from the site on Thursday. In a speech he intended to deliver at the ceremony but released instead on his Facebook page, Fidesz deputy chairman Gergely Gulyás wrote that Donáth’s past was not faultless, but many celebrated anti-Nazi personalities had also professed anti-Semitic views.

The difference, he said, was that rather than being murdered by the Nazis, Donáth was killed by post-war communist justice. This was the second similar statue-incident within a few months, after the plan to erect a statue to pre-war historian and politician Bálint Hóman was cancelled late last year.

In Népszava, Jenő Veres welcomes the ‘anti-Fascists who put the participants at the ceremony to rout’. He asks if the right-wing in Hungary only has icons who ‘stink of racism’. He believes Donáth was lucky ‘not to be executed by the communists for his actual sins’. He compares the case to that of the anecdote about a Nazi whose heirs demanded compensation from the German state for the death of their ‘Auschwitz-victim dad,’ a drunkard who fell down from the watchtower.

In its front-page editorial, Népszabadság calls the failure of the two initiatives an encouraging sign that ‘a democratic-minded public still exists which can prevent the regime from enshrining the memory of its idols’. The left-wing daily admits that both Hóman and Donáth were innocent and their sentences were based on concocted charges.

But the authors claim that Donáth was indeed a Hungarian fascist and therefore should not be chosen as an example to follow. Népszabadság accuses ’the regime’ of choosing its heroes from among interwar personalities because it likes ’authoritarianism, large farming estates and a kind of parliamentary system with a perennial ruling party’.

In Magyar Hírlap, Sándor Faggyas quotes Donáth as having rejected both ’national socialism and fascism’. He acknowledges that ‘not all of Donáth’s words and deeds are acceptable’, but he regards him as an innocent victim of post-1945 Communist terror.

In the same daily, Zsolt Bayer argues that history should not be judged exclusively from the viewpoint of the injustices Jews were subjected to during the 20th century. He lists the names of some of Hungary’s most respected writers and poets who held anti-Semitic views for some time and still are universally recognised as having contributed to Hungary’s progress.

In a highly controversial closing paragraph, Bayer complains that people are often branded as anti-Semites just for having ’said something bad or the truth about Jewry’. He admits that most of Hungary’s Jews opposed the short lived Bolshevik regime in 1919, but since Jews were overrepresented among its leaders, he understands that ’the bulk of the population harboured anger and resentment towards Hungary’s Jews’.

In Magyar Nemzet, György Pápay suggests that several interpretations of one and the same event may well be legitimate and people with conflicting opinions should learn to tolerate each other. He understands the animosity and the sensitivity behind the acts on both sides and warns those in power to be ‘more considerate towards those sensitivities’ before erecting statues, in order to avoid painful conflicts and the awkwardness of having to remove them afterwards.