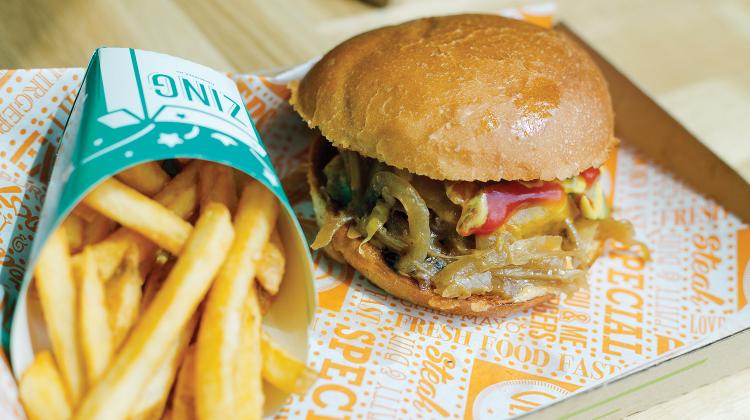 Zing Burger works with high-quality ingredients and they prepare everything themselves, from the bread to the special sauces. Ádám Susánszky and Eszter Csanda began with their first food truck three years ago, and they have built a small chain by today. They are making burger fans happy and proving that fast food does not have to be unhealthy.

Many people know the Zing Burger shop at 60 Király utca in the Jewish Quarter. However, the chain has just opened a branch at Széll Kálmán tér and in the coming weeks they are planning to open another restaurant with an extended menu in District V. They are also working on opening franchise shops around Hungary.

“We began with a single food truck, then we added a second one,” Zing Burger owner and co-founder Ádám Susánszky recalls. “We soon had a permanent place for the trucks and we worked at all the possible festivals as well. We were the first ones to do this kind of festival catering. After some time we also opened our first permanent restaurant.”

The first shop without four wheels under the kitchen was their burger bar in Király utca. They prepare everything in the basement kitchen. The burger buns and baguettes, for example, are baked by their own bakers fresh each morning, and the meat and sauces are prepared as well.

Today they own two more small food trucks in the Jewish Quarter. They are often on the road at Hungarian festivals and they can be rented by companies or by private people, including a chef and the food.

You know what’s inside

“Fast food does not have to be unhealthy,” Susánszky believes. “It depends on what ingredients are used and how you live your life other than that. You can’t fool your body. You need to get moving and pay attention to what you eat.”
Zing Burger prepares almost everything from fresh ingredients and renounces flavour enhancers and preservatives. Susánszky and Csanda pay a lot of attention to transparency and avoid additionally purchased products as much as possible.

The staff is trained about the home-made products too. Desserts, such as the ice-cream from the famous brand Ben & Jerrys, and even the drinks are coming from fair trade, whenever possible. Zing Burger pays special attention to the quality and origin of meat, using Angus beef from Hungary and meeting quality standards.

“Our first burger was created shortly before opening our first food truck. We urgently needed a menu. There were hardly any ingredients but sometimes less is simply more,” Susánszky remembers. “I caramelised some white onions, I took a good quality mustard and ketchup, made a quick chili mayonnaise and I grilled the meat.”

Ever since, this has been the recipe for their classic Street Burger. Zing Burger offers six burger variations with meat and one vegetarian option with goat cheese. You can also order different sandwiches – among others the famous American sandwich classic, the Philly Cheese Steak.

Fans of garnishes shouldn’t be disappointed: they have everything from crispy, low-fat fries to jalapeños filled with cheese.

Families and party people under the same roof

“Opening our second branch at Széll Kálmán tér did not only add one more restaurant to our business but also some novelties on our menu card,” Susánszky says. Széll Kálmán tér used to be called Moszkva tér, so the Zing Burger team created a traditional Hungarian burger called, appropriately, the Moszkva Tér Burger.

The menu card is not the only thing that has changed at Széll Kálmán tér. It is bright and family friendly and they offer a menu for children. At an extra counter called “Zing Coffee & Co.”, a well-trained barista prepares coffee specialties, smoothies and milkshakes. They use coffee beans purchased from the roasting workshop Casino Mocca, as featured in The Budapest Times.

In the evening the Stifler Bar opens in the back rooms of the restaurant, which invites people on a night out or preparing to party to have a relaxing stay. “We are targeting a broad group of people with all that, and we would not like to limit that through our prices,” Susánszky says. “We can serve people with very different incomes from our menu.
“However, sometimes this brings up challenges for us, but up until now we have been able to master all of them and we are planning to continue working that way in the future too.”

You can find more information at www.zingburger.hu