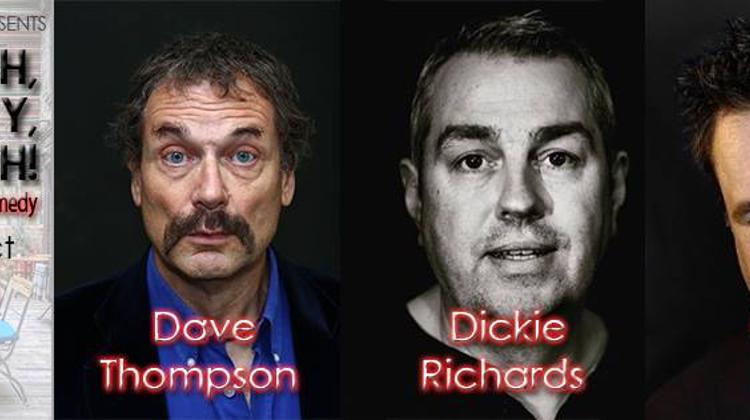 Give your laughing gear a workout with a healthy dose of English humour courtesy of our host Dave Thomspon and cast of international comedians featuring Sy Thomas and Geoff Boyes.

Stand-up comedian, a Cockney of Polish descent has been performing comedy since 2010. Won the S&G best newcomer award 2010. Has performed at The Greenwich Comedy Festival, The Bloomsbury Theatre and The London Wonderground (Spiegeltent). Co-wrote and performed as Inspector Lestrade in the 5 star Edinburgh 2012 show Sherlock Holmes The Return Of The Hound.

In addition to his solo work is a member of legendary The Greatest Show On Legs and is one half of The Two Yuris (Russia’s answer to The Two Ronnies). “Natural comic with relaxed style, intelligent, silly and very funny” -Steve Bowditch

Geoff has worked widely across TV including Dead Ringers, This Morning and Live at the Comedy Store. On radio he has appeared on shows such as The Live Stand Up Show and Colin (BBC Radio 2), which he also co-wrote. Geoff’s theatre credits include his own shows Why? and Noises and Other Announcements.Geoff performs at all the major UK and international comedy clubs such as The Comedy Store, Banana Cabaret, Comedy Café, Jongleurs, Up the Creek, Laughter Lounge (Dublin) as well as being asked to entertain the troops overseas for the Combined Services Entertainment.

Please purchase your ticket in advence: