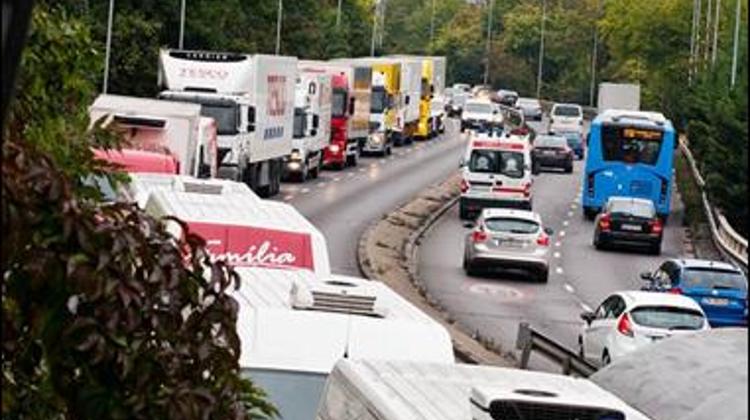 Convoy of food trucks rolls through Budapest ahead of World Food Day press conference – highlighting how food waste, climate change and malnutrition are pieces of the same puzzle.

Every year, more than one-third of global food production for human consumption is lost or wasted and never finds its way onto plates. This is equivalent to 1.3 billion tonnes of edible food.

Yet, significant numbers of people have problems obtaining adequate food for an active, healthy life, and growing numbers in all countries suffer with different forms of malnutrition.

These and other data were presented at today’s World Food Day press conference, convened by the UN Food and Agriculture Agency (FAO), the Hungarian Foodbank Association, and the Ministry of Agriculture of Hungary.

The press conference followed the annual convoy of food trucks through central Budapest, bringing public attention to continued food insecurity in Europe and Central Asia and practical solutions to the problem.

This year’s food truck convoy – organized by the Hungarian Foodbank Association with FAO and other partners (see list below) – carried some 30 tonnes of food with an approximate value of 20 million Hungarian forint or about 100 000 Euro. The goods were donated by food companies operating in Hungary, and destined for distribution from the Hungarian Foocdbank Association’s warehouse on Lokator Street in Budapest.

“Food that is grown but then lost or wasted is responsible for about 8 percent of greenhouse gas emissions,” said Vladimir Rakhmanin, FAO Assistant Director-General and Regional Representative for Europe and Central Asia. “The volume of water used to produce lost or wasted food is equivalent to three times the volume of Lake Geneva, or close to 50 times the volume of Lake Balaton. Can we afford this level of waste? This damage to the environment? Of course not.”

Rakhmanin noted that on Monday 17 October, FAO would release a definitive global study on climate change, its impact on food production, and how agriculture must change to reduce its contribution to greenhouse gas levels.

“We are happy to invite more and more food companies to the Food Bank Convoy year by year,” said Balazs Cseh, president of Hungarian Food Bank. “The companies participating in the event are regular food donators of Hungarian Food Bank. Through this programme, we aim to draw attention to the problem of food waste and malnutrition and encourage more and more companies in the food industry to donate their food surplus instead of wasting it. With this year’s donation of approximately 30 tonnes, we can help more than 12 000 people in need during the winter months.”

In 1981, it was Hungary that proposed the establishment of 16 October as World Food Day. It has grown to become one of the most widely observed of all international days, marked with events of all kinds in more than 100 countries on all continents.

While the three partner organizations are very different, their representatives emphasized values that they share sustainable use of natural resources, combating food waste and losses, and caring for the poor and food-insecure – in Hungary and beyond.

In its more than 10 years of operation, the Hungarian Foodbank Association has continued to increase the amount of the surplus food saved annually. The Association collects donated surplus food from manufacturers and retail chains – products close to their expiry date, products with faulty packaging, and high-quality products that cannot be sold because of their seasonality. In 2015, the Foodbank delivered 2 600 tonnes of donated food free of charge, to approximately 300 000 people in need, through nearly 300 partner organizations. Since its founding in 2005, it has distributed 37 200 tonnes of food worth 17.2 billion forints (€ 55.5 million, or US$ 61.5 million).

FAO’s main objective is to ensure food and nutrition security for all people while using the Earth’s natural resources in a sustainable manner. The Organization has 194 member countries and one member organization (the European Union). It has its headquarters in Rome, Italy. FAO has been present in Budapest since 1996. In 2007, its Regional Office for Europe and Central Asia was moved to Budapest, and in the same year a Shared Services Centre was also established here.

Ministry of Agriculture of Hungary

The Ministry of Agriculture is responsible for official relations with the UN agencies for food and agriculture, foremost for diplomatic and technical cooperation with the FAO. In line with the 2007 Agreement signed between the Hungarian Government and the FAO the Ministry is in charge of maintaining the FAO offices in Budapest as well as of managing the successful Hungarian-FAO joint scholarship program and of monitoring FAO development projects supported financially and technically by Hungary.