Interview With László Cseh: “Phelps Is A Major Inspiration For Me” 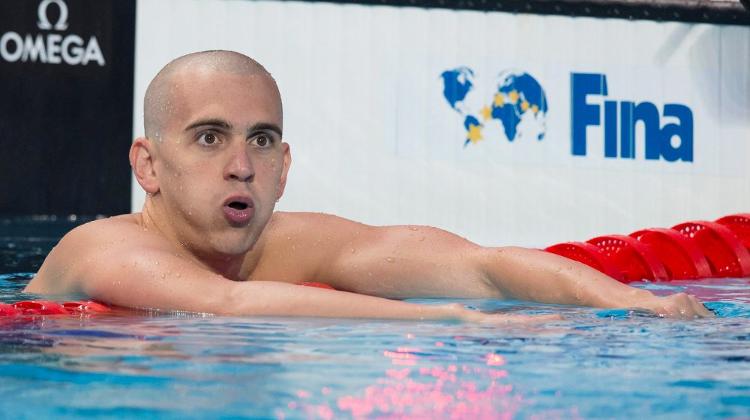 There was an additional Hungarian speaker at the FINA Convention’s Panel Talk in Windsor: the FINA invited László Cseh to the traditional closing event with all the participants including the athletes, where he was introduced to the audience as the living legend of the Aquatics.

László Cseh had the chance to talk about his career with an amazing company at the Panel Talk, he shared the podium to answer to all the questions with Janet Evans, the four-time American Olympic champion, Bill May, the very first male World Champion of the Synchronised Swimming, Gary Hunt, the king of the High Diving, Meaghan Benfeito, the new shining star of the Canadian Diving and Aaron Feltham, the Water Polo representative to the FINA Athletes Committee, who player water polo in Eger for many years.

The Hungarian World Champion has stated that he still considers the three silver Olympic medals from Peking as the climax of his career. ‘I consider my silver medals as victories, not lost golds, since it was Michael Phelps, the greatest swimmer of all time/ever lived who finished before me.

He is the major inspiration for me now and next year whether he is retired last month. His times represents a level I would like to get above, for example next year at the FINA World Championship in Budapest. It makes me sad not to have him racing in the pool next to us, he will be dearly missed but I think we will have an enough share number of opponents.

Cseh told us also that he was predestined to swim because of his love for water, as a little kid he couldn’t been removed from the bath tub. ‘It was obvious for my family that I should continue this in the pool.

When I had stood on the podium in 2002 at the Short Course European Championship with a medal in my hand, I got my first push, the World Championship a year later in Barcelona was a miracle itself, I only wanted to get into the finals but I had the chance again to stand on the podium with another medal in my shaking hands. That was fantastic feeling which makes me swim better and faster to live that experience through again.

About the future of the Aquatics, the four Olympic medal holders shared the idea of having more prestigious competitions, maybe expanding the World Cup series further, for example more events at the first quarter of the year would be optional. Even though László visited the World Championship venue at the hockey arena and did his trainings, he did not feel the urge to compete.

‘I had 2 months’ rest after the Rio Olympics, I don’t think it is enough time to get into shape to achieve results I would be proud of. These months were entitled to tune in to the trainings since I will work hard from the beginning of the next January because I do have big goals to reach at the World Championship in Budapest.

The World Championship starts on Tuesday with a splendid number of Hungarian participants. Péter Bernek and Richárd Márton will start the event at the semi-final of the 400m freestyle, later Katinka Hosszú and Zsuzsanna Jakabos will race at the 200m freestyle, Tamás Kenderesi and Dávid Verrasztó at the 200m butterfly, Ádám Telegdy and Kristóf Rasovszky at the 100 backstroke, Katinka Hosszú at the 400m medley and 100 bacstroke and finally Dávid Földházi and Márton Barta at the 200m medley.