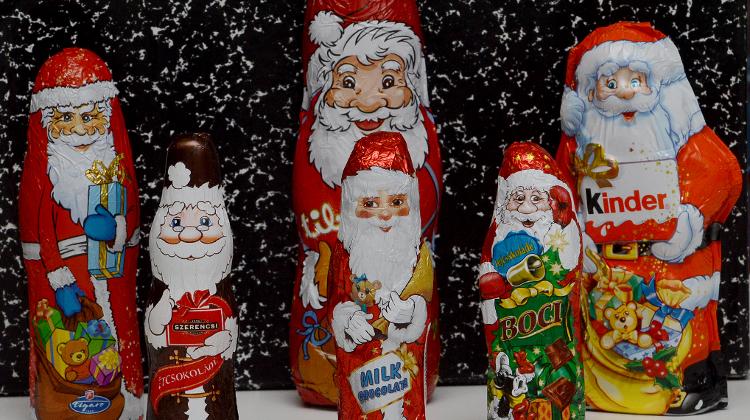 "According to Hungarian custom it is Saint Nicholas (Mikulás) who comes bearing gifts for children on his name day, December 6th.

The Mikulás day tradition is built on the story of a bishop from Asia Minor who lived in the 4th century, and who is said to have performed many miracles.

Traditionally a chocolate Mikulás is given to 'good children' in Hungary, and a birch stick is given to 'naughty kids'.

When the pestilence killed Saint Nicholas’s wealthy parents, he handed out all his riches to the poor and dedicated himself to a charitable life. According to legend, he saved the three daughters of an impoverished family from immorality by throwing a gold laced handkerchief through their window. He is said to have rebuked the winds and the sea and have raised a shipmaster from the dead.

As traditional in medieval times, he was a Patron Saint of different professions: crop traders, lawyers, pharmacists, fishermen, millers, bridge-builders, saleswomen and pilgrims. Friend to the children, protector of mothers and marriage, Nicholas is always illustrated in white, along with symbols of openness, birth, magic, and light.

In the traditional Nicholas-walk, on December 6, St. Nicholas comes clothed in a bishop’s attire, a long red coat and a red cap on his head, holding a shepherd’s crook in one hand, and carrying a sack full of gifts on his back.

He knocks on every window, and he asks children whether they had been good or bad, rewarding them according to their behavior: the good ones receive presents, the bad children are given a birch stick (virgács).

(There are places where young men, playing Nicholas and devils, visit all the ladies and young children to frighten them out of their wits.)

Instead of hanging their stockings on the mantle, children in Hungary put a pair of brightly polished shoes in the window. By morning, these will be filled with goodies, and very likely the presents will include a birch stick as well, just in case. :-) (This tradition dates back only some one hundred years.)

…And one last curiosity about the Hungarian Santa is that he supposedly lives in a small village in Fejér County, called Nagykarácsony (meaning: Great Christmas), so that is where Hungarian children should write to him. ;-)"