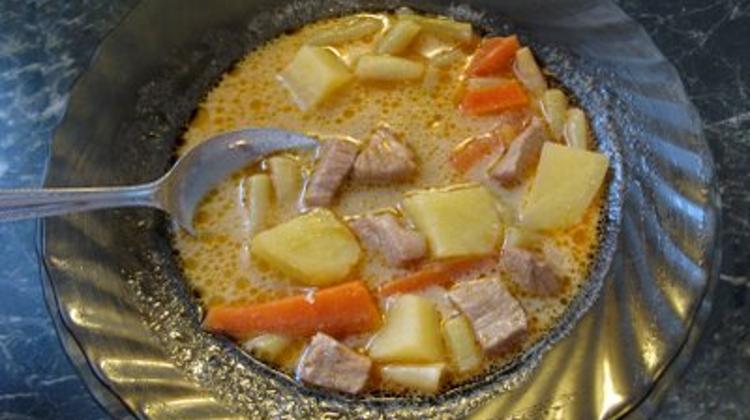 Our Palóc Goulash or Palóc Soup, which is similar like our national goulash, but different. It is because palóc goulash consists of more ingredients (for example French beans and sour cream). And originally, it's made of lamb.

The "palóc" word means the Palóc Country, which is home to Hungary’s largest Catholic ethnic minority. Although it is difficult to establish exactly the origin and spread of the Palóc people, the Palóc country extends from the Mátra to around the Rima and Sajó valleys, and from the Bükk Hills west to the marshes of the Ipoly.

But the palóc soup is originated really not from tha Palóc Country, our palóc soup got the name from Kálmán Mikszáth, who was a well known novelist and the major palóc in Hungary.

He made this phrase "The Slovak Kinsmen and the Good Palóc People" famous in the 19th century. According to the legend, this soup was created for him by János Gundel (or Johann Gundel), who established the most famous Hungarian catering dynasty.

The legend was simply: Mikszáth wanted to eat a special dish which consists of all elements of the Hungarian tastes and cuisine, hence János Gundel surprised him with the palóc soup on his birthday.

Now, let's take a look at the recipe!

1. Heat the oil in a large pot and the sliced onions and sauté until they get a nice golden brown color. Add the meat cube and sauté together until the meat begin to whiten. Sprinkle them with paprika powder and sauté a bit more.

2. Add the salt and ground black pepper and the pressed garlics, pour water enough to cover the content of the pan and let it simmer on low heat for the meat is half-cooked. Add the diced vegetables, the celery leaf and parsley and some more salt if necessary and add some more (2-3 cups) water too.

3. When the vegetables are already half softened put it in the green beans.

4. When the beans and the meat are almost tender add the sliced potatoes. Let it cook until the potatoes are also soften.

5. Mix a flour with the sour cream in a soup-plate and add one big spoon soup, mixed well. When cool enough the soup carefully add the whole mixed and boil again.

Well, this soup is not really a palóc dish, but the recipe with the sour flavors is not far from the world of the palóc kitchen and the soup is also central in the palóc cooking.

If you travel to Hungary don't forget to taste the really palóc dishes beside the plaóc soup and visit the Palóc Country, because not only the foods are delicious in this part of Hungary, but it's famous for the folklore and the whole countryside is wonderful.