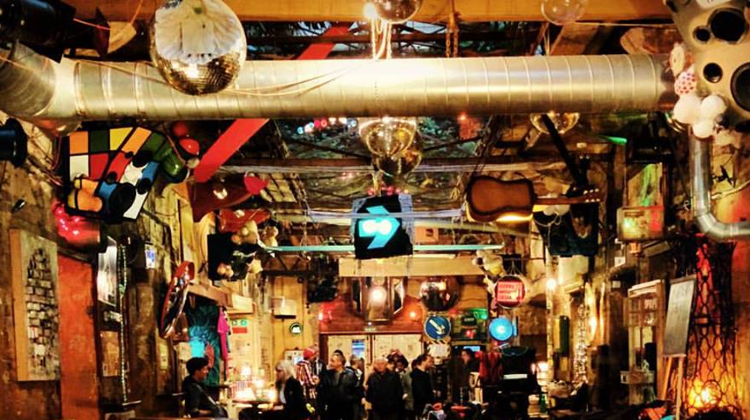 The area, also called Elisabethtown (Erzsébetváros) is an exciting mixture of historic buildings and hipster bars, amalgamating memories of the past with the latest trends in the heart of Budapest. It is becoming home of world famous ruin bars or ruin pubs, a genre uniquely Hungarian.

The quarter, until World War II home of a flourishing Jewish community (with many small enterprises like shops, restaurants, workshops here), after a long period of storm and stress is reviving in the recent years.

Transforming into party district of Budapest it is becoming home of world famous ruin bars or ruin pubs (literally 'pub in a ruin', romkocsma in Hungarian; a pub opened in an abandoned old building), a genre uniquely Hungarian.

The epitome of all ruin bars, Szimpla with it's ziggzaggy interieurs offers not only a great possibility to chill out, but a real visual adventure for the visitor: in the rooms of the former apartment building, you can see a lovely mixture of vintage furniture, old telephones and even a Trabant car. Besides being a party zone, Szimpla hosts many kinds of events such as Sunday Market.

Featured even in New In Travel list of Lonely Planet, this downtown market hall reopened it's doors just recently after a thorough renovation. Opened originally in 1897, this historic building offers the full section of a traditional Hungarian farmers market, where you can buy fresh fruit, vegetables, meet and many other products.

It's name meaning Stone Soup, this place is much more than an ordinary restaurant. In the house in infamous Kazinczy Street you can find not only a homey restaurant, where almost all of the ingredients (from pasta to bread, jams to sauces) are made by themselves, but a delicates shop and 3 apartements too. Also a garden is connectd to the house. Besides emblematic dishes which remain the same, the menu is constantl changin, according to the season.

Getting it's name ('Teeth House') originally from a dental technician, sign of which is left to be a reminiscent of the good old times, Fogasház is a unique fusion of a bar and a cultural space, where we can meet both local DJ's and contemporary artists. It aims to be a community center, organising exhibitions and movie screenings too.

With it's characteristic onion-shaped domes with gilded ornaments, the building, containing also a Jewish Museum, resembles of a Moorish buidling. This as the first synagogue built in this style, and many synagogues later designeda round the world choose the same style. This is the biggest synagogue of Europe and the second biggest synagogue of the world.

The building, getting it's name from the series of inner courtyards opening into each other, was built in the beginning of the 20th century. The courtyards were filled with a vivid commercial activity, and the place is part of the vibrant life of the city again, now full of restaurants, bars, pubs, art galleries, and many other exciting establishments, becoming one of the main centers of entertainment in Budapest.

Gellei hairdressing family was started in the 1930s, and in the 1980s András Gellei has become famous by gaining Golden Crown Award. The barber shop was founded by András Jr and David Gellei, later joined by their brother Aaron. Their aim is to revive barber culture by offering traditional barbering service, being a men-only shop.