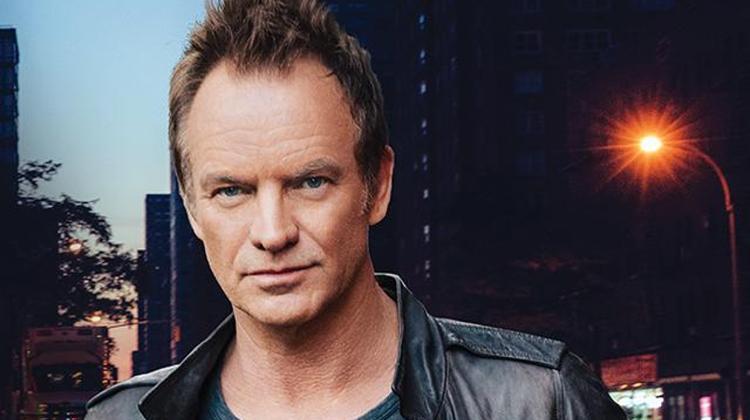 Sting live in Budapest on October 13th, 2017 at Budapest Arena after a 5-year-break. Following sold out concerts across North America, Europe, South America and Mexico, Sting’s 57th & 9th World Tour, is taking the world by storm with rave reviews from fans and critics alike.

The guitar-driven rock tour, which launched in North America, visited Europe, Central and South America and is currently in Asia before returning to Europe for select summer festival appearances has now confirmed an extended fall tour with new shows in Central and Eastern Europe. Additional European concert dates still to be announced.

On the 57th & 9th Tour, Sting is joined by a 3-piece band including his longtime guitarist, Dominic Miller, Josh Freese (drums) and Rufus Miller (guitar) with special guest Joe Sumner, as well as accordion player, Percy Cardona, who regularly performs with The Last Bandoleros.

Members of the official Sting.com fan club will have the opportunity to purchase tickets in advance beginning Tuesday, 30-May with complete details available at www.sting.com/tour.

Tickets for Budapest are on sale via www.livenation.hu and www.ticketpro.hu. There are 5 different seating, Front of Stage and standing tickets available for the Sting show at the Budapest Sportarena on 13th October, 2017. Hot Tickets and Early Entry packages are also available.

“At the heart of what Sting does is a supreme songwriting talent, flowing melodies, audacious grooves and meaningful lyrics delivered by a master musician who seems to get a genuine sense of accomplishment from performing at the highest possible level.

This show deserved a badge of honour." - The Telegraph, UK

“Sting isn't just a performer who comes to put on a show. He is an artist who arrives to create art on the stage.” -  Alto Voltaje, Puerto Rico

"The set pulsated though the overwhelming database of new songs, solo material, and classic Police hits. Sting is a universal story teller, built from the stuff of what they say legends are made of” - Vancouver Weekly

Sting’s twelfth solo studio album, 57th & 9th, his first rock/pop project in over a decade, was released November 11 on A&M/Interscope Records. The ten-song collection represents a wide range of Sting’s musical and songwriting styles from the raucous, guitar-driven first single, “I Can’t Stop Thinking About You” to the ferocious, Road Warrior-style imagery of “Petrol Head” and the anthemic “50,000.” The album, produced by Martin Kierszenbaum, was recorded in just a few weeks with Sting’s long-time collaborators Dominic Miller (guitar) and Vinnie Colaiuta (drums), as well as drummer Josh Freese (Nine Inch Nails, Guns n’ Roses), guitarist Lyle Workman and backing vocals by the San Antonio-based Tex-Mex band The Last Bandoleros.

Tickets for Budapest will be on sale via www.livenation.hu and www.ticketpro.hu at 10 am, 2nd June.

There are 5 different seating, Front of Stage and standing tickets available for the Sting show at the Budapest Sportarena on 13th October, 2017.