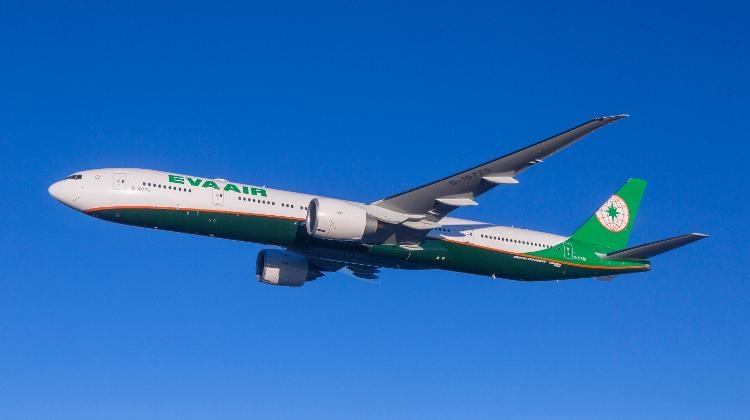 EVA Air was founded in March 1989 as subsidiary of the Evergreen Group. The one-hundred-percent privately owned Taiwanese airline is the sister company of Evergreen Marine Corporation, one of the five biggest container shipping companies in the world. Since the inauguration of its maiden flight on 1 July 1991, EVA Air has been steadily expanding its operation network and fleet.

The airline serves a total of more than 60 destinations on four continents (Europe, Asia, America and Oceania) and offers a far-reaching service network that benefits both passengers and cargo customers.

The airline´s fleet comprises more than 70 aircrafts, most of which are Airbus and Boeing. EVA Air´s aim for the future is the extension of its network as well as of its fleet.

Through its membership in Star Alliance since June 2013, EVA Air is able to offer its customers access to a global network of more than 1.300 destinations, along with seamless travel and status recognition within the various member carrier frequent flyer programmes.

The Taiwanese carrier set a milestone in the airline industry in 1992 with the introduction of the remarkable Elite Class (formerly called Evergreen Deluxe Class), a class that is in between Economy and Business class. This cabin service concept has been adapted by other carriers around the world in the years since its introduction.

EVA Air is one of only nine airlines worldwide to earn SKYTRAX’s 5-Star rating for the highest global quality. SKYTRAX, Travel + Leisure and AirlineRatings.com have ranked it among the world’s Top-10 Best International Airlines.

Furthermore, from the beginning on EVA AIR´s corporate philosophy has been successfully built up on the highest safety standards in the aviation industry. Actually, EVA AIR has received numerous safety awards and is one of the safest airlines in the world according to the annual JACDEC Safety Ranking.

Four times a week from Vienna to Taipei via Bangkok with a Boeing 777-300.

Since its maiden flight on 11 November 1991 EVA Air has continuously been flying the route Taipei – Bangkok – Vienna and has positioned itself most successfully on the Austrian and Central- and Eastern European markets.

The cabins of the Boeing 77-300ER are in elegant and welcoming design and outstanding in regard to comfort – for example by their spacious seat pitches of 96,5cm in Elite and, respectively, 81cm in Economy Class. All seats of the Triple Seven are equipped with 110V power sockets and USB access.

Each guest on board of EVA Air´s Triple Seven has access to his or her own interactive “Star Gallery”-Audio/Video on Demand (AVOD) entertainment program with more than 50 films, more than 1.000 music titles and ten video games as well as digital air-to-ground, easy-to-access Short Message Service (SMS) in English and Chinese for sending messages to mobile phones or e-mail addresses.

Passengers also enjoy meals served piping hot from steam ovens and can choose between an Asian and a European menu.

The luxurious Royal Laurel Class was first introduced in 2012. EVA Air has configured the Royal Laurel cabin with 38 seats in a reverse herringbone layout that enables passengers at windows to look out without turning and those in the centre to easily dine and talk with travel companions. Each roomy seat is approximately 65 cm wide, reclines 180 degrees and stretches out almost 2 meters.

Each passenger environment includes thoughtful features such as a coat hook, space for shoe stowage, handy nooks for water, glasses and reading material and a convenient seat-side table for beverages, snacks or writing materials, all within easy reach. Furthermore, passengers can use convenient privacy panels to establish cosy inflight cocoons for rest or work.

Passengers with personal electronic devices can work or relax using multi-function AV-input outlets, USB and iPod ports on a system equipped with software such as Media Player, Photo Viewer and PDF Reader.

Royal Laurel Class passengers can pre-order their favourite meals before their flight and choose from a mouth-watering array of menu items and seasonal delicacies which are exclusively bookable via Internet 21 days in advance until as late as 24 hours before the scheduled departure.

Four times a week from Vienna to Taipei via Bangkok with a Boeing 777-300.

Quick and convenient reach to Thailand with the Vienna – Bangkok non-stop flight or to Taiwan since no airport transfer needed to final destination. With partner airlines supplement several regional airport can be reached in the region too. In this case Bangkok stopover can always be included in the EVA Air ticket.

Airline offers pre-ordering of special meals to cater passangers special needs by using the online “Meal Order” function at least 24 hours before the departure time of the flight.

Please note that as only limited types of meals are currently available for online selection, should you have any other special meal request, please contact EVA Air reservation office to make satisfactory arrangements for you.

For Kosher meals, orders have to be made at least three days flight departure.

More information and tickets via your Hungarian travel agent or via