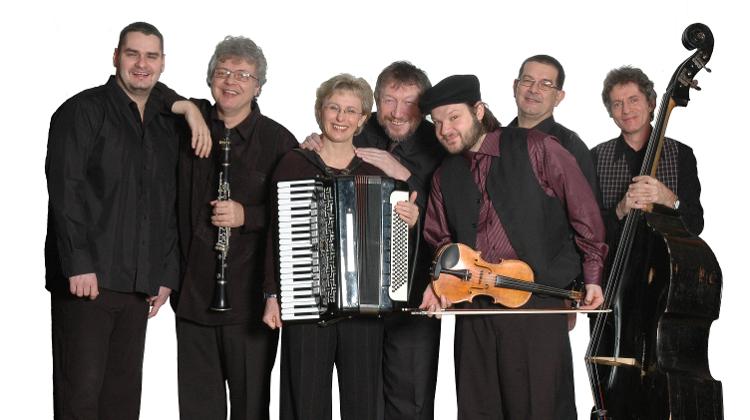 These unique summer evening concert include performances by Budapest Klezmer Band, Gramophonia Hot Jazz Orchestra, Papajazz and Budapest Bar plus many others. Read on for the full programme.

Tamás Bényei and the Gramophonia Hot Jazz Orchestra will perform the emblematic hits of the Jazz Age in a fashionably vintage manner. Their concert features the ever-popular songs from classic Hungarian movies as well as the legendary compositions originally performed by the orchestras of Benny Goodman, Artie Shaw, Tommy Dorsey, and Jimmy Lunceford. The wonderfully charming voice of lead singer Tamás Bényei and the dance show with young swing dancers all guarantee a delightful and memorable trip back in time.

Guests: Mariann Falusi, Tamás Berki, Nikoletta Szőke
The Jazz Request Show concerts started in 2010 and have proven to be a lasting hit ever since. Pianist Péter Sárik set out to demonstrate that jazz is one of the most lovable genres with its many colours and joyfulness. Throughout the years, the Péter Sárik Trio created renditions of the audience’s favourite songs, whether it’s pop, rock, classical or folk music. For their Evening Concert at the Zoo, Péter Sárik offers a selection of their greatest hits with the help of such notable vocalists as Mariann Falusi, Nikoletta Szőke, and Tamás Berki.

The name GESZTI surely evokes at least one memorable verse or rhyme. Last year, even more of his lyrics and melodies became instant classics, with Péter Geszti kickstarting his new musical act called GESZTI, which follows a row of his hit bands, Rapülők, Jazz+Az, and Gringo Sztár. After last year’s amazing success at the Zoo, Péter Geszti is preparing with an even more unique show, with guest performer Iza Széles “S’Iza” accompanied by the vocalist of the Létvágy concerts, Rita Ambrus.

Guests: Andrea Malek and Péter Szolnoki
Papajazz is committed to bringing the music of the 1920s, 1930s, and 1940s to life. Their latest record, My Blue Heaven features Scott Robinson, who also appeared on stage with the band in the fall of 2016. The album and the concert brought fame for Papajazz, and the band keeps pleasing their audience with light-hearted and highly entertaining music. Their repertoire features well-known American and Hungarian jazz standards as well as hidden gems from the era. For their concert in the Zoo, Papajazz is joined by two popular Hungarian singers, Andrea Malek and Péter Szolnoki.

Extraordinary performers, an amazing band, and great songs – this is the recipe of Budapest Bár’s wild success. Budapest Bár celebrates its 10th anniversary of creating a delightful mix of music from different epochs, cultures, and styles. Their great singers are accompanied by a masterfully arranged gypsy band to perform the touching and cheerful repertoire. Their dazzling show is guaranteed to please all generations looking for fun and artistry. The Budapest Bár is led by Róbert Farkas and joined by Juci Németh, György Ferenczi, Tibor Kiss, and Krisztián Szűcs.

Information
• Gates of the Zoo open at 7pm on concert days
• Seating is served on  first comes - first  basis
• Concert visitors may take a stroll in the Zoo before the concert starts
• Coffee, soda, sandwiches and cakes are available on the spot

Ticket price: HUF 3700
• If all available seats are sold, a limited number of standing tickets go on sale for HUF 1900 at the Zoo Box Office from 8:30pm on the day of the performance.
• In case of rain, a rain check is available for the dates indicated below. If the concert is cancelled again, refunds are available at the point of purchase.

The organizers cannot assume liability for any changes in the program due to external or unforeseen circumstances.

Guests: Judit Hernádi and Gábor Heilig
The song Lövölde tér performed by actor/director/singer András Kern was released 30 years ago and has remained unforgettable ever since. Kern went on creating more albums, with Semmi baj (2010) being the most recent. At this live concert, Kern will perform his new songs as well as his earlier hits, including Hé, 67!, Pincér-rock, Moszkva, Te majd kézen fogsz és hazavezetsz, and Semmi baj – and, of course, Lövölde tér. Besides the great songs, the performance will feature notable guest artists bringing great humour and affectionate irony on stage.

Guest: Kátya Tompos
Known and loved across Europe and the United States, the Budapest Klezmer Band is a remarkable performer of traditional Jewish music. The melodies they play come from various regions of Central Eastern Europe where the culture of Jewish music has deep roots. The band’s founder and leader, Ferenc „Fegya” Jávori was born in Mukacheve (Munkács) and received the Kossuth Prize for his accomplishments. On this special occasion the band is accompanied by the well-known actress, Kátya Tompos as a guest singer.