Restaurant Review: Börze In Budapest - Things Can Only Get Better? 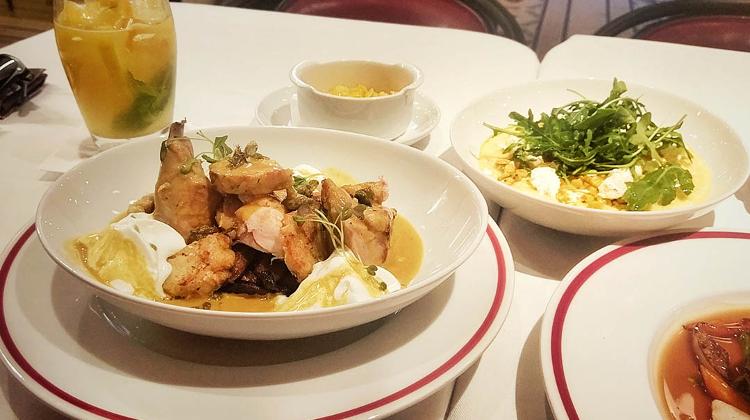 This place looks pretty dang good! I love brass things, and this place has plenty. The lights are mostly brass with some wood and leather accents. I love it. The only thing I didn’t quite like are the counters, it kind of looks like mozzarella pieces in red dirt, but whatever, the place looks great. The wait staff is super nice as well without being cheesy. However, those are the only good things I can say about this place as of now.

Whenever I start climbing again after a couple months of rest because of an injury, I have the same feeling. I see the route, I know I was able to do it three months ago but when I start, I’m kind of clumsy and the execution sucks. I usually fall but even if I make it to the top, I realize that there is still much to improve. This is exactly how I felt after this meal. None of the dishes were bad but none of them were good. There was always an element that was messed up.

Our waiter asked us what we wanted to drink. Alcoholic or non-alcoholic. I said non-alcoholic. He said they have quince lemonade so I ordered that. When he brought it to the table he told me that there is quince palinka in there (palinka/schnapps is usually a fruit distillate, aka; alcohol). I wasn’t driving, I’m not in AA so whatever, I drank it. It was delicious, but still, he should have told me there was alcohol in there before he brought it out.

We asked a bunch of questions about how the foods are prepared and for almost everything he had to double check with someone else. As I said, they have only been open for three weeks so if he doesn’t know something it’s fine but not knowing almost anything. I’ve been a waiter for many years, just write a little cheat sheet and keep it in your pocket. No guest is gonna get angry at you if you whip it out because you are uncertain of something. If they do, they’re assholes anyway.

We ordered risotto with corn and goat cheese, herb crusted chicken with vegetables (we asked for little to no oil on the veggies), rabbit vadas, (vadas means game in Hungarian, as in game meat. It’s usually served with steamed/boiled bread dumplings and a sauce that’s made of carrots and mustard) and strawberry cream soup for dessert. I asked if the risotto was made fresh and the waiter said yes. I’ve made risotto a bunch of times before and it usually takes between 30-40 minutes.

Since our food came out in a very timely 20 minutes-ish I was convinced that it was made earlier today and was reheated. When I told this to the manager he reassured me that the risotto is made fresh. Ms. Salty looked it up and apparently it really is supposed to take around 18-20 minutes for risotto.

So that was my bad, you learn something new every day. Regardless, the risotto was almost sweet enough to qualify as a dessert. Luckily there were goat cheese pieces and arugula on top that made it edible. Unfortunately once the goat cheese ran out I was left with a sweet corn and milk rice dessert. I left about 2/3rd of the plate.

If you’ve had rabbit before you know that it’s meat is super tender. This particular wabbit was sous-vide (vacuum packed and cooked in a water bath for X amount of time, the higher X is the more tender the meat) until it turned into mush. I could spread it with my finger on the side of the plate. Yuck. The steamed/boiled bread dumplings were perfect and so was the sauce.

The only thing they forgot to mention was that the whole thing was on a bed of shiitake mushrooms. I hate mushrooms unless it’s truffles. I ate the dumplings with the sauce, Ms. Salty ate the shrooms.

Her chicken was crusted with herb infused breadcrumbs. She hates breadcrumbs because they soak up oil. I tasted pretty good though but without it, the chicken was pretty bland underneath. The veggies were soaked in oil. We ordered a side of pickled vegetables which were really good and the extra pickled corn that came with the risotto was also really good until you got to the bottom, where they were soaked in this extra sugary vinegar.

Now I know why the risotto was so sweet. The corn was fresh though and you could tell they cooked it on the cob and than cut it off so extra points for that. The strawberry cream soup ended up not being a cream soup at all. Whenever you confit (basically cooking something in its own juices) fruits, you end up with excess juice that is super sweet. I drain that off and drink it with soda as a spritzer. That’s basically what I got as a “cream” soup. Unbelievably sweet goop with strawberry sorbet and toasted peanuts. It was with little exaggeration, strawberry flavored simple syrup.

We told this all to the manager. He took the soup off the bill but quite honestly, after this performance I would have cut the bill in half. That’s just my opinion, he was still super nice. Unfortunately, it doesn’t change the fact that we had another bad dinner and went home hungry. Luckily there were some Tesco select cold cuts and cheese and vegetables when we got home…

I’m not gonna recommend this place for now, but we will definitely return because I think there is potential and the staff is just so freaking nice.

P.S.: Those Tesco select cold cuts are the bomb! Not as good as getting the same cut, fresh, from a specialty store, but for the price, it’s really good.