Szijjártó: Hungary Aims To Be Region’s Top Exporter To China 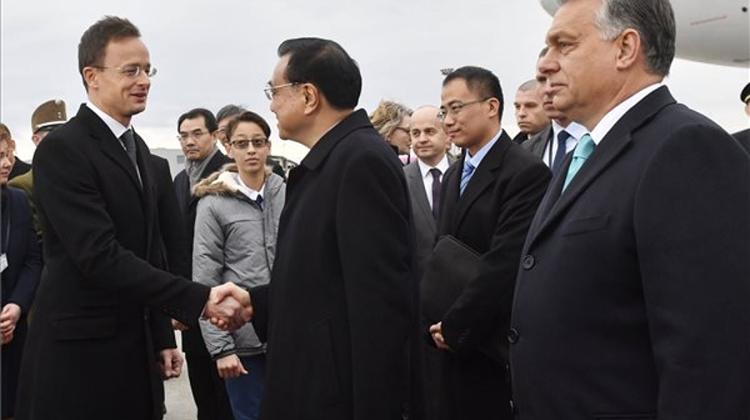 Hungary has set a realistic goal of becoming the central European region’s top exporter to China as well as China’s top investment destination in the region, Hungary’s foreign minister said on Sunday. Speaking at a press conference at Budapest’s Liszt Ferenc International Airport ahead of the arrival of Chinese Prime Minister Li Keqiang, Péter Szijjártó said Hungary has so far been successful in reaching the former goal.

Data from the first eight months of the year indicate that Hungarian exports to China rose by 26% compared with last year’s export growth rate of 25%. The volume of Chinese investments in Hungary has exceeded 4.1 billion US dollars, Szijjártó added.

The Chinese premier will be in Budapest to attend the China-CEE “16+1” summit on Monday. First on the agenda is a business forum to be attended by 1,000 business people representing 330 Chinese, 340 central European and some 300 Hungarian companies. Following the forum, China and the central European countries will sign a total of 23 bilateral agreements, Szijjártó said.

On Tuesday, Prime Minister Viktor Orbán is scheduled to hold talks with his Chinese colleague. Following the talks, the two leaders will sign 11 bilateral agreements. Apart from his Chinese counterpart, Orbán is set to meet with six other prime ministers over the course of the next two days, Szijjártó added.

The minister also said that the central European investment fund established by China “will enter its second phase”. Hungary’s Eximbank will be contributing 70 billion US dollars to it which will have to be offset by investments in Hungary worth at least 140 billion dollars, Szijjártó said.

The fund will manage a total of 1 billion dollars, he added.

Further, China Development Bank will provide a 20 million euro credit line for BYD’s electric bus plant in Komárom in northwest Hungary for developments. An agreement will also be signed between China’s Fudan University and Hungary’s John von Neumann University on the launch of a joint MBA programme in 2019, Szijjártó added.

The public procurement tender for the revamp of the Hungarian section of the Budapest-Belgrade railway line will also be called on Monday, he said. Szijjártó said that the Economy Ministry had concluded talks on the conditions of China’s financing offer for the project.

The offer is for a 20-year US dollar-based loan with a 2.5% interest rate which can be used to finance up to 85% of the project, he said. Construction works are expected to begin in late 2020, Szijjártó said. The total cost of the project is estimated to be 550 billion forints (EUR 1.76bn), he added.