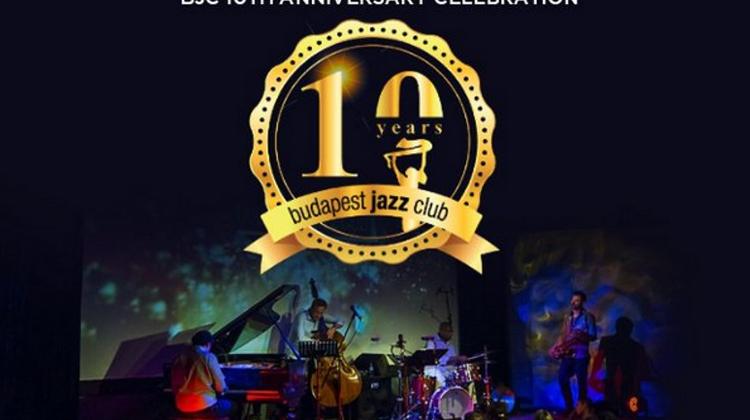 The 10th anniversary of Budapest Jazz Club’s success and operation is a giant step for the club and the Hungarian jazz scene, owing to the contribution of the club’s owners and colleagues, the performers, organizers, and last, but not least: the audience. Running for a decade now, Budapest Jazz Club is the longest active and currently the oldest jazz club in Budapest.

The club is open over 300 days yearly – but the number of concerts is much more than that, thanks to the super popular Monday, Wednesday, and weekend jam sessions; and also the festivals, when one night can have even 3-4 performances.

In the past decade, as BJC’s popularity escalated, besides the growing number of foreign visitors, the Hungarian audience has increased also, strengthening the fan club of BJC and all the frequently performing artists. Now, BJC has become the center of the Hungarian jazz scene, where the most acknowledged jazz musicians perform regularly.

After taking off in 2007, Budapest Jazz Club became well known beyond the Hungarian border in a few years. One of the main reasons is the series “World Stars at Budapest Jazz Club”, which helped the club join the international circulation of outstanding jazz clubs. It started officially in November 2009 with the concert of Dave Douglas, and from 2011, it has been running at full speed.

That year, Mike Stern, Kurt Elling, Ravi Coltrane, Victor Bailey, Miguel Zenon and Stacey Kent passed the door handle of the stage passageway to eachother – at a different location back then.

After spending a few years in Múzeum street, Budapest Jazz Club moved to its current location in Hollán Ernõ street. A contract with the General Assembly of Budapest led to another series besides the world star performances, which include public service activities. This means Jazzart Public Foundation – the operator of BJC - organizes free concerts, and provides a place for music students for education, workshops, and rehearsals.

Jazzart believes in the importance of searching and introducing young talent, and has been working together on this project with Harmony Workshop Foundation, who has been by the side of the club from almost the very beginning. The other, most essential partner of the club is Alerant Zrt. which has been the main sponsor of the club for nine years.

Budapest Jazz Club celebrates its 10th anniversary on the second weekend of January. The festival-style jazz party on the 12th and 13th of January starts with Fenyves Márk Trio, a band full of young talents, followed by the “home big band” of the club, BJC Big Band, who are preparing with a special program.

Three guest celebrities, Malek Andrea, Micheller Myrtill, and Szakcsi Lakatos Béla will be joining this night. The kickoff of the second day will be SOLATI band, who combine neo soul and jazz on master level. After them, one of the most popular bands in Hungary, who have a significant number of fans abroad also, Balázs Elemér Group will perform.

The icing of the cake will be the huge cake itself, which will be fairly handed out to everyone on the scene. Both nights will be ended with the good old BJC Jam session, and this time, jazz lovers can celebrate until the sun rises.

Ticket Sales:
At BJC Box Office: Opens one hour before the show.