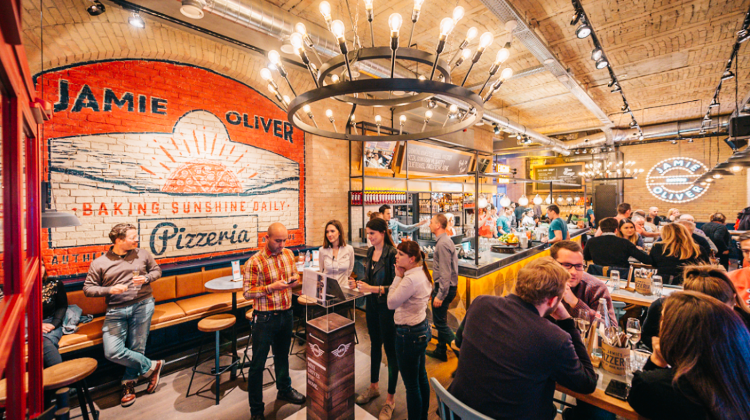 British celebrity chef Jamie Oliver began his journey to international fame in 1999 when he debuted as “The Naked Chef” on BBC Television. The “Jamie’s Italian” restaurants were founded by the healthy-cooking advocate and his Italian mentor, chef Gennaro Contaldo, in Oxford, UK, in 2008, since when the chain has grown to more than 60 worldwide, including the one in Budapest’s Castle District that opened in May 2016.

Pizzerias operating under the Oliver brand name have opened in the United Kingdom and India, but they work independently without being part of a complex franchise.

Like Jamie’s Italian Budapest it is operated by the prestigious hospitality professionals the Zsidai Group, who are the proprietors of 12 restaurants, cafés and terraces and two hotels in the capital, such as Spíler, ÉS Bisztró, Pierrot, 21 Hungarian Kitchen, Baltazár Grill and other city hotspots.

Oliver’s partnership with the Zsidai Group involved more than half a year of preparations and two months of professional training before Jamie’s Italian Budapest opened last May on Szentháromság utca in the Castle District.

Oliver is known for his passion for healthy cooking, the way he handles ingredients and his little victory dance when seeing an especially nice tomato or smelling a batch of fresh basil.

The ingredients are strictly selected at his establishments, and are all fresh. Animal welfare is a basic requirement and the meat comes from free-range animals. Fruits and vegetables are sourced from sustainable farms.

They all need to pass Oliver’s internal rating system, the JOSIE scale (Jamie Oliver Supplier Information Exchange). The ingredients are clean and GMO-free.

To ensure consistently high quality, some ingredients are the same in all of the chef’s eateries around the world, including Levoni ham, “00” flour (an Italian grading), olive oil, olives and Parmigiano-Reggiano cheese.

The Budapest restaurant and pizzeria also use products from Hungarian suppliers.

The pizza dough is made freshly every day. The 11 direct-from-the-oven pizzas range from classic margherita to carbonara and spicy chili beef to gamberetti with prawns.

Meals are also offered for vegetarians and vegans. Guests with a modest appetite can order pizzetta, a half portion of pizza served alongside a light dish from the restaurant’s creative salad selection with eight varieties, such as rocket and Parmesan, roasted squash and lentil, or Super Food.

Pasta aficionados can select such al forno (oven-baked) treats as tastefully layered lasagne, melt-in-the-mouth gnocchi Bolognese and vegetable-rich Honeycomb cannelloni, but any of the bruschetta trio, such as Prosciutto and Gorgonzola, are also recommended.

Among the drinks, Hungarian selections are plentiful, featuring reds, whites and rosés from many of the country’s 22 wine regions, alongside craft beers from the local Hedon and Monyo breweries.