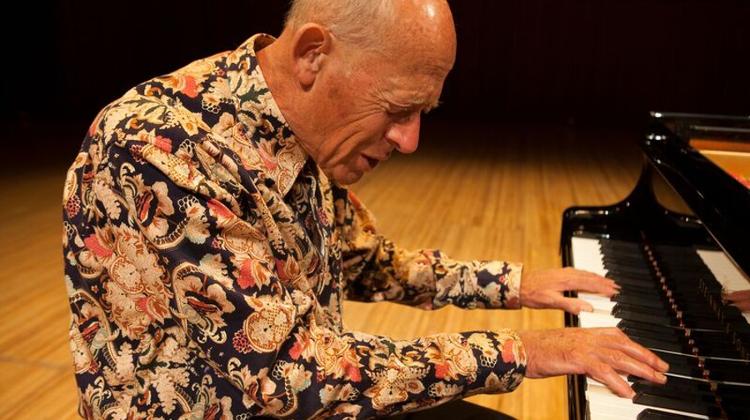 The world famous Australian pianist, David Helfgott returns to Budapest as part of a new European tour to much joy of his Hungarian fans. He has fascinated the Hungarian audience at his previous concerts, and so the musical wonder will be on stage again. You can expect one the most fantastic classical concerts of the year! Gorgeous music from a genius artist whose talent and individuality, and sorely tried life is considered as a miracle.

David Helfgott will be accompanied by the Art Anzix Symphonic Orchestra.

Helfgott's life inspired the film Shine which was nominated for seven Oscar awards. In the film he was played by actor Geoffrey Rush who won the Academy Award in the category of best male actors and could take home the golden statuette!

More details about the musician:

The famous Australian pianist, David Helfgott was born in Melbourne, spent much of his early life in Perth and showed extraordinary pianistic ability from an early age, winning the state finals of the ABC’s Instrumental & Vocal Competition six times. At age 17, David began studying with Alice Carrard, a former student of Bartok and Istvan Thoman, himself a pupil of Liszt.

Two years later, he went to London to study at the Royal College of Music with Cyril Smith, who described him as his most brilliant student in 25 years of teaching and likened him to Horowitz, both technically and temperamentally.

He won a number of awards at the College, including the Dannreuther Prize for Best Concerto Performance for his triumphant performance of Rachmaninov’s Third Piano Concerto. However, towards the end of his time in London, he faced increased emotional instability and mental excitability, compounded by the death in Perth of his mentor, writer Katherine Susannah Pritchard, and ended up with a nervous breakdown.

A period of frequent hospitalization followed during the 1970s, but by 1976 David had moved to a halfway house where he stayed for six years. The greatest crisis for him had been the loss of his inner music, but he remembers the day the music came back: “The fog lifted, I could hear again … I survived.”

David was brought back to the public’s attention by Dr Chris Reynolds, who owned Riccardo’s wine bar in Perth, where he performed on Saturday nights. It was there he met his future wife, Gillian, who, with the support of promoter Mike Parry, helped him gradually resume his concert career with concert performances in Perth and a sell-out tour in Australia.

David triumphantly returned to an active life of concert-giving and performance, and made a series of CDs, including the soundtrack of the Oscar-winning film Shine, which celebrates his remarkable and inspiring life. David’s recording of the Rachmaninov Third was the number one selling CD in Australia, the United States and the United Kingdom for many months. Both attained gold status.

In October 1996, he played four sold-out concerts at the Sydney Opera House, which was followed by a challenging world tour the next year, throughout the US and the UK, concluding with his return to the Royal Albert Hall in London, were he played the Rachmaninov Third to a capacity crowd and received a thunderous standing ovation.

The following years, David kept up his world touring, through Asia, Africa, Japan, New Zealand and Europe, while also maintaining a busy Australian schedule. Over the past 30 years he is touring the world by and large continuously, celebrated by the audience wherever he performs.

David has been awarded with an Honorary Doctorate Of Music by Edith Cowan University in Western Australia and with an Honorary Citizenship from Montecatini Terme in Italy, is an inductee into The Australian Walk Of Fame and in January 2008, was bestowed with the great honor of a sculpture in his likeness, unveiled in the Bellingen Council Park.