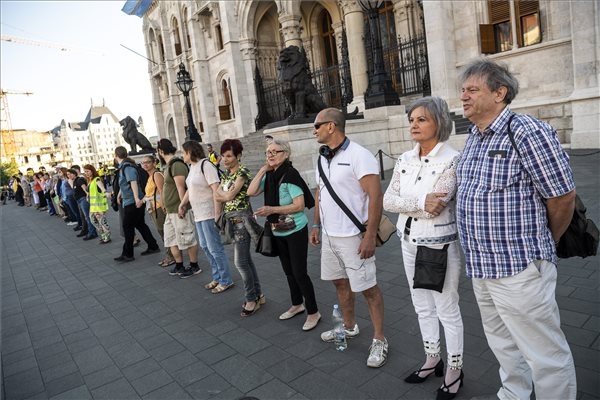 Civil protestors formed a human chain around Parliament on the eve of the inaugural session of the new national assembly.

The members of the demonstration organised by the Facebook group named “Rule of Law” lined up along the side of the building facing Kossuth Lajos square.

The protestors waved the national colours, European Union flags and some the flag of the European Left party.

The demonstrators set up a stage in front of Parliament on which several participants gave short speeches.

In the Facebook invitation to the demonstration, organisers called on Hungary to join the European Public Prosecutor’s Office (EPPO), for the restoration of the previous constitution and election law and an independent public media.

The demonstrators said they plan to stay in front of Parliament until 6am on Tuesday after which they will to make their way to nearby Olimpia Park where they will submit a petition for Hungary to join the EPPO.

Contrary to earlier press reports, no cordons have been set up on Kossuth Lajos square. Police officers and members of the Parliamentary Guard can be seen in the area, MTI’s correspondent said.