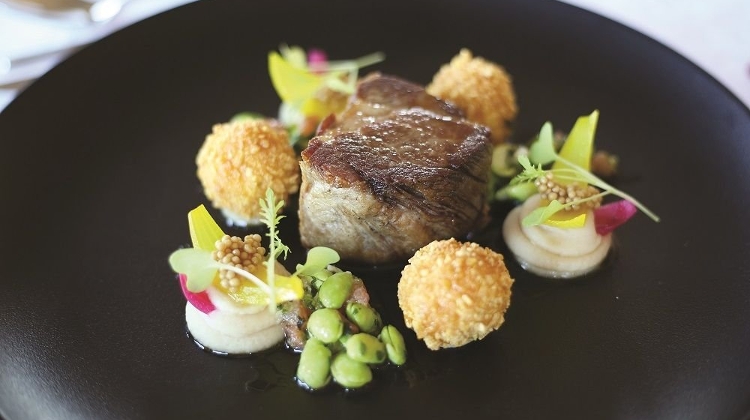 There are restaurants in the city that people born and raised here would never think of opting for. Castle District or Váci utca? No way. Andrássy út? Only if someone truly trusted recommends it (such as The Budapest Times for example). Ráday utca? In justified exceptions.

But what if because of our fear of "tourist traps" we lose out on wonderful culinary experiences? So we went on a discovery tour and found that the Halászbástya Étterem is one of those restaurants in the city that should not be missed.

There are very few of us true Budapesters who have not been to the Fisherman's Bastion yet. And if you go, you will certainly fall in love with the romantic turrets and curved observation terraces.

The neo-Romanesque monument erected between 1895 and 1902 – which owes its name to the Fisheries Guild, who protected this section of the city wall in the Middle Ages – also counts as one of the most popular tourist destinations in the city, and is frequented daily by innumerable tour groups from all over the world.

While mainly the western galleries and terraces are used to take a quick look at the incomparable Danube panorama, the bastion in the north tower has a sophisticated restaurant, the Halászbástya Étterem.

The restaurant got its present form in 2010, but there had been a restaurant here between 1970 and 2003. Time had left its mark on the North Tower, which eventually had to be closed off because it was deemed too dangerous to enter.

When the support of the government allowed the spending of around HUF 500 million, Magyar Halászbástya Kft. – the present owner of Halászbástya Étterem – completely renovated the tower and its adjoining gallery. The stairs that lead up to this part of the bastion have also been redone and even an elevator was built, making the restaurant wheelchair-accessible.

A significant portion of the money was spent on restoring the interior in a historically accurate manner and it was done with great success. After entering the restaurant and passing the anteroom, patrons find themselves in the middle of the tower, a section known as the Hall of Knights.

In addition to a few tables for two to four people, four heavy wooden round tables are available for larger groups. The largest of them, right in the centre of the impressive room, can accommodate up to 12 people.

In addition to crystal chandeliers and carved wooden figures on the walls, the carpets specially made for the restaurant give the interior its historic ambience. The carpet displays one of the famous emblems of the bastion as well as the logo of the restaurant, a shield held by two lions with the outline of the iconic building.

If you want to enjoy a bit more privacy, you should use the narrow staircase and retreat to the upper gallery of theHall of Knights, where five tables await offering hospitality to up to six people each. According to restaurant manager Róbert Gáspár, Hungarian Prime Minister Viktor Orbán and other heads of state, who have already paid one or two visits to the restaurant, also use the gallery for an intimate meal.

Some of the tables even have their own small outdoor balcony from which you can quickly snap a great souvenir photo between two courses.

From here a few more steps lead to the tower room of the restaurant, which opens to a terrace, offering room for an additional 40 guests, and without exaggerating it is one of the most beautiful places in the Castle District, especially in good weather. But no matter on which floor of the restaurant you are sitting, a unique view of the Danube and the city are included in your meal.

Classics in a new format

The well-arranged menu focuses on traditional Hungarian dishes, such as goulash soup, mangalica neck steak and chicken paprikash. But while the restaurant bows to the dictates of its location, the implementation of local cuisine is very much its own way. In terms of preparation technology and especially presentation, the restaurant can easily keep up with other fine-dining locations of the Hungarian capital.

Classics such as liver pate or chicken pork chops that are actually used for simple home cooking are broken down into their individual building blocks and served so or reassembled in a surprising shape.

The kitchen of the restaurant is run by head chef Zoltán Hammer. His unique style for each dish is also reflected in the choice of porcelain used for the serving.

Halászbástya Étterem is playful in its choice of ingredients or side dishes, whether it is using goat cheese balls with bourbon vanilla, lamb instead of beef for its goulash soup, or polenta instead of potatoes to complement the steak. All this makes a visit to the restaurant a novel experience even for Hungarians or those who are already familiar with the local cuisine.

In addition to the à la carte courses and the recommendations of the chef, the restaurant offers a variety of six-course meals, the cheapest for HUF 14000. There are corresponding wine pairings available for each menu.

This is ensured by their extensive wine selection, which covers all the regions of Hungary as well as a good selection of foreign wines.

If one defines a "tourist trap" by exploiting the popularity of a particular location to sell inferior and often unoriginal food at excessive prices, Halászbástya Étterem undoubtedly receives absolution.

Granted, a visit to the elegant restaurant does not come cheaply, and it's clear that you will have to pay for the prestigious location, but the quality you receive is in a healthy relationship with the prices of the place.

If you are not an international film star, a head-of-state, a well-known businessman – who regularly frequent the establishment – or simply if your purse is not filled with cash to the brink, you should probably reserve a visit to the Halászbástya Étterem for a special occasion. But if you want to pull out all the stops for that special someone, this is exactly the place to celebrate romantic anniversaries, or even to hold a wedding reception.

In addition to the unique view, the sophisticated interior and the surprisingly innovatively presented dishes, it is above all the professional and very attentive service that makes a visit a special experience.

To be placed at the table by the head waiter, to conjure up the food under the serving bell or the liquor cart appearing between the courses may perhaps be considered outdated in the trendy restaurants of the city, but here it contributes to the magic of fine dining.

If you want to experience the historical ambiance and the splendour of Halászbástya Étterem without having to empty all of your pockets, you can do so in the lounge area of the restaurant located in the gallery corridor adjacent to the tower.

Here, too, patrons can expect an excellent – albeit not so exclusive – service.