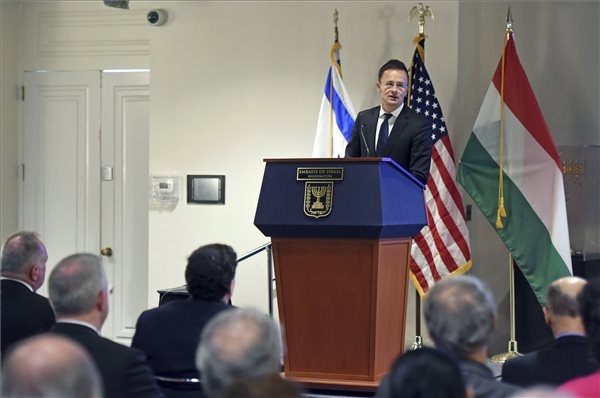 Foreign Minister Péter Szijjártó has held talks with US company executives during visits in Washington, DC and New York.

He told MTI that he had met heads of IFF (International Flavours and Fragrances), the American corporation producing flavours and fragrances which is setting up a global financial services centre in Budapest, to employ 160 highly trained staff.

The company, a global market leader, employs as many as 7,300 people around the world and recently bought out an Israeli firm with trade partners in Hungary, he added.

The move will further strengthen Hungary’s position in the service centres market. Including the new unit, Hungary will be home to over 110 service providers employing over 46,000 Hungarians, who are mostly highly skilled and multilingual people with university degrees, Szijjártó said.

The US-Hungarian business council USHBC, which incorporates 14 US corporations with units in Hungary, will hold a meeting on Wednesday.

It is partly thanks to their investments that US firms now form the second largest community of investors in Hungary, employing more than 100,000 people, he said.

The government has so far signed strategic partnerships with 12 US firms and the number will increase on Friday as a result of a meeting with ExxonMobil executives.

The company operates a service centre in Hungary employing 1,600 people who carry out accounting, auditing and tax advisory duties for the company’s units in Europe, the Middle East and Africa, Szijjártó added.

He noted that a strategic cooperation deal with the company will be concluded on Friday, playing a potentially major role in Hungary’s energy diversification.

The American gas company has exploration rights at a Black Sea gas field in Romania, and if gas extraction starts there within a few years, Hungary will have a new source of energy supply thanks to the conclusion by Hungarian businesses of transport deals between 2022 and 2037.

Szijjártó also referred to talks with the leaders of Itron, one of the leading smart tech companies in the area of digital energy consumption readings.

One of the world’s efficiency leaders, the company has established an R&D centre in Budapest, where it is taking on young Hungarians on a constant basis, he said.

Commenting on his meeting with the head of the IMF’s strategy, policy and review department, the minister said: “The Hungarian economy is in a state of dimensional flux, and the world economy is moving … into an innovative era.”

Hungary’s economy is open, and so the global economic transformation has an especially strong bearing on it, he said.

But thanks to the government’s economic policymaking and the introduction of Europe’s lowest taxes, Hungary is gaining from the transition to the new world economic era, he insisted, adding that an increasing number of innovation leaders had selected Hungary as a development site for new technology.

Discussions with the IMF also covered the International Financial Corporation (IFC), which will renew its cooperation with Hungary with a view to launching a new asset management fund so the country can capture trade positions in various countries around the world.