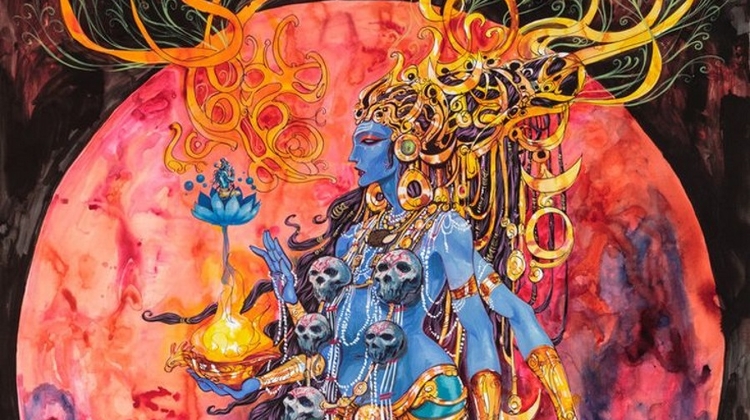 Now on until 6 January 2019, this rich exhibition presents the Devi Cults and Traditional Female Roles in India.

On the Indian subcontinent, the different regional cults of the Goddess, or Devi, as she is known in India, are rooted deep in the past.

From the age of the Indus Valley Civilisation until the arrival of the globalised world of the twenty-first century, the people of India have long worshipped Devi, and continue to do so.

The Goddess – like Hinduism itself – has many faces, and every different face and embodiment of Devi is accompanied by a wealth of different traditions. She is the youthful Beauty, who enchants mortals and gods alike.

She is the faithful Wife, seated tenderly in her husband’s lap. She is the Mother, the birth-giver and creator of all humankind. But she is also the belligerent Warrior Goddess, who destroys evil and saves the world from catastrophe.

There are, of course, many other types of beauties, wives, mothers and warriors in India. These are the earthly women: daughters, lovers and mothers.

Even though they too are enchanting, caring, blessed with the creative force and fierce as a warrior, they have no temples dedicated to them, nor are sacrifices offered to them. Yet without woman, there would be no life in India, no society, religion or art.

The primary aim of the latest exhibition at the Ferenc Hopp Museum of Asiatic Arts is to present the different faces of Hindu Goddesses through the traditional female roles they fulfil.

Where the Goddess appears as a beauty, a wife, a mother and a warrior, the exhibition seeks to answer the question of how these idealised female roles are manifested in earthly society.

The objects on show range from classical Indian sculptures to contemporary graphic novels, underlining the continuity of subject and form between ancient and modern Hindu art.

The majority of the exhibits are part of the Indian collection at the Hopp Museum, and they are joined by works reflecting the unique visual world of the living artist Abhishek Singh, which are centred on the identity of Devi.

This is the first exhibition at the Hopp Museum for several decades to concentrate on Hindu art, and it encompasses the religious cults of the earliest days of Indian history, as well as the social roles and image of women today.

Younger visitors have their own personal “guide” to show them around – Radhika will present interesting highlights from the exhibition, and give information about India and the world of Hindu gods and goddesses. Placed around the exhibition space are “cultural discovery” boxes and packages, providing visitors of all ages with a true “hands-on” experience.

Accompanying the exhibition, and coinciding with events on the Hindu calendar, family days, film clubs, open-air cinema shows and exclusive guided tours will immerse visitors even deeper in Indian art and culture.

As is customary at the Hopp Museum, the exhibition is accompanied by a richly illustrated volume of essays, available both in Hungarian and in English, as well as its own museum education publication in Hungarian, which tells some of the fantastic stories about Hindu gods and goddesses through images recalling the world of the graphic novel.