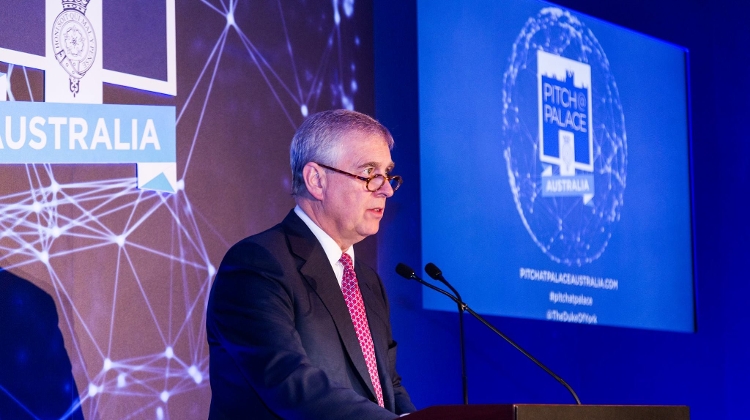 Prince Andrew will participate in a range of programs in Budapest from Monday the 10th to Wednesday the 12th of September, at the request of Her Majesty’s Government, the British Embassy informs XpatLoop.

Team XpatLoop.com were kindly invited to attend a reception with The Duke Of York at the British Ambassador's Residence in Budapest, unfortunately we had to politely decline and so hereby sincerely wish him a charming stay in Hungary.

British Ambassador Iain Lindsay OBE represents the UK government as well as Her Majesty The Queen in Hungary, and her second son's programme in Budapest includes official meetings with President Áder and PM Orbán.

Some commentators have called this visit another good example of UK 'Brexit diplomacy’, as the British Royal Family have travelled on a number of such 'Brexit missions' at the request of the UK Government following the 2016 'Brexit referendum' - a brand of 'soft diplomacy', AKA a charm offensive, characterised by a campaign of friendliness ahead of the UK leaving the EU.

The Brexit referendum result saw 51.9% of Brits voting to exit the European Union, putting the UK on course to leave by 30 March 2019 after a period of Brexit negotiations, about which The Duke of York (58) has been publicly vocal in a refreshingly candid manner (click to see video).

Prince Andrew caused controversy in 2016 when he commented on Brexit and Donald Trump, as it's unusual for a member of The Royal Family to speak out on issues involving politics.

HRH reportedly said Trump becoming the US president together with the UK leaving the EU could “tear things apart”.

As expected many reacted by saying that the seventh-in-line to the British throne should remain impartial on such issues. A Conservative Member of Parliament who campaigned for Britain to leave the EU said The Duke of Yourk's words were “extraordinary”. Other observers were glad to hear The Duke was openly saying what they were thinking.

While in the Hungarian capital we're told His Royal Highness is also set to meet the Minister of Foreign Affairs, entrepreneurs, and people from organisations specifically focused on education, science, technology and engineering.

This will include the opening of a conference on Civil Engineering at the Academy of Sciences, which will commemorate the 200th anniversary of the UK’s Institute of Civil Engineers – of which The Duke is a Patron.

Over the course of the trip HRH will open a new Public Social Responsibility Workshop at the National University of Public Service, establishing a new link with the University of Birmingham.

Additionally during his second stay in Hungary, the first was in 20015, we're told The Duke will learn about Hungary’s commitment to diversity and equal opportunities with a visit to the Suhanj Training Centre, Hungary’s first integrated fitness centre for disabled and able bodied people.

HRH is set to tour the fitness facility to meet members of the centre as well as Hungarian Paralympians who competed at the London Paralympics in 2012.

At the end of his visit Prince Andrew will be introduced to Hungary’s science and technology start-up community, as he will attend the final of the first ever Pitch@Palace Hungary – an initiative founded by HRH in 2014 to "amplify and accelerate the work of entrepreneurs across the UK, and now globally".

Many expats wonder what he has to say, publicly, about Brexit while in Hungary - watch this space! For now Brits in Budapest and around Hungary, as well as Hungarians and oher EU nationls, may well be interested in this breaking news article about Brexit: Letter To UK Nationals Living In Hungary From Iain Lindsay OBE British Ambassador

The Duke of York was born at Buckingham Palace on 19th February, 1960; the first child born to a reigning monarch for 103 years.

He is the second son and third child of The Queen and The Duke of Edinburgh.

Christened Andrew Albert Christian Edward, he was titled The Prince Andrew until his marriage in 1986, when he was created The Duke of York.

Prince Andrew was educated at Heatherdown Preparatory School in Ascot and Gordonstoun School in Morayshire, Scotland.

These days The Duke of York supports Her Majesty The Queen as Head of State by representing Her Majesty in the UK and abroad, receiving Heads of State and Government, and attending state and ceremonial occasions.

HRH has close personal links to the Armed Services and holds a number of senior military appointments.

The Duke works to recognise the importance of service and the voluntary sector, supporting and acting as Patron of a number of charitable organisations.

The Duke also leads on a range of initiatives to support and encourage entrepreneurial activity.