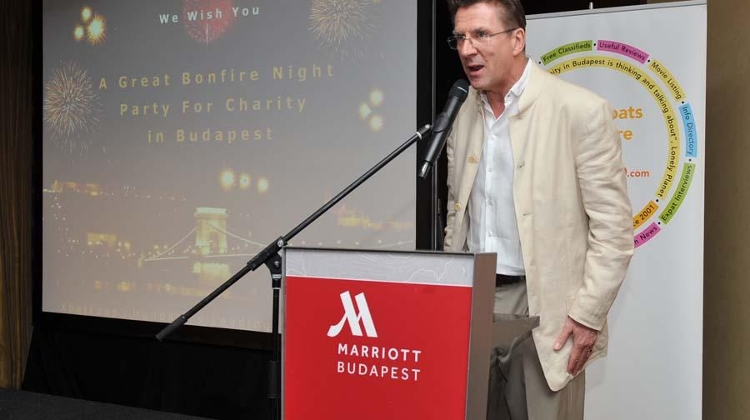 Expat community portal XpatLoop will be hosting its annual firework-themed charity fund raising party in the Grand Ballroom of the Budapest Marriott Hotel on Saturday, October 27.

The event is usually held closer to November 5, a traditional British occasion known variously as Bonfire Night or Guy Fawkes Night. A decision to avoid weekdays and Sundays has led to the earlier date this year.

“Experience has taught me that if you avoid those days and have it on a Friday or a Saturday, you attract more people and therefore can raise more money for the charities,” says XpatLoop founder Stephen Linfitt.

He says the goal is to raise around HUF 5 million from donations on the evening, all of which will be split between three charities. This year those are: UNICEF Hungary (works to save children’s lives, to defend their rights, and to help them fulfil their potential, from early childhood through adolescence); Magic Lamp Wish Granting Foundation, also known by its Hungarian name of Csodalámpa (helps children aged 3-18 suffering from life-threatening illnesses); and the Young People in Need (Rászoruló Fiatalok) non-profit organization (focuses on solutions to emotional abuse of Hungarian children up to the age of 18, and also supports other local charities helping children in need.

The international community in Hungary has come together for more than a decade to support the event, which also doubles as XpatLoop.com’s birthday party. This year the website will be celebrating its 18th anniversary.

Master of Ceremonies for the evening will be voiceover maestro Hans Peterson, with this year’s live auction – always a major contributor to the funds raised on the night, being run by celebrity chef Marvin Gauci, the owner of the Caviar & Bull restaurant.

The suggested entrance fee is a donation of HUF 10,000, or more, per person, payable upon arrival. All guests who, as spaces are limited, need to pre-register through the xpatloop.com website, get a free day pass worth HUF 6,000 for the Go Active premier health and fitness club.

“As usual, there’ll be a smattering of celebrities, lots of refreshments, live music, plus a few surprises, which all combine to make this an enjoyable and worthwhile event to attend for the benefit of local children in need,” Linfitt promises.

The party runs from 6 p.m. until midnight. Dress code is smart casual. Gábor Patzauer, founder and president of Csodalámpa, said his team is “honored” that its work “is supported by XpatLoop readers.”