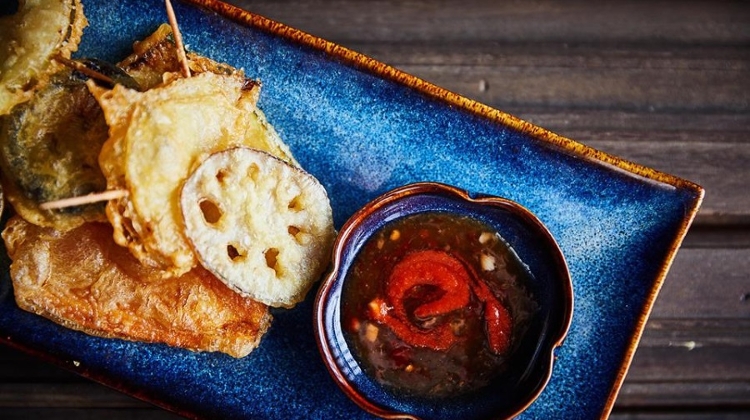 The cuisine of Asia has long been represented in the Hungarian street food scene, but now it is gaining a foothold in the upscale catering segment as well.

In the last few years several high-end restaurants dedicated to the flavours of the Far East have opened in Budapest. One of them is Khan, which offers Vietnamese, Chinese, Thai and Mongolian cuisine in a stylish, yet relaxed atmosphere.

The fact that the coupling of Asian food in trendy surroundings at moderate, if not cheap prices is well received, was no surprise to the owners of Khan – among them bag designer Ahn Tuan. After all, they were already successful with their first restaurant, Sáo Food & Bar, which specialises in Sino-Vietnamese cuisine, in Gozsdu Udvar.

For their second location the fashion-conscious restaurateurs have picked Újlipótváros. Here, between Bauhaus and panel buildings, away from the noise of the Ring Road and in the immediate vicinity of the promenade Pozsonyi út, the Khan opened its doors in August 2017.

Unlike the funky Sáo with its colourful lanterns and decorative birdcages, the Khan presents itself in a slightly darker, more mature design. Although almost eclectic, the Chinese vases and statuettes, the Vietnamese raffia plates and other décor from all corners of Asia combine to form an organic whole.

As co-founder Song Tao Wang explains, the fine wood panelling on the walls and the bar, as well as the furniture – of which it is difficult to find two that look exactly alike – blends harmoniously.

Overall, the Khan gives the impression of a stylish trendy place, one that you might expect to see when strolling in Paris or London, but without the stiffness and snobbish display that is often the characteristic of such places.

Khan owes its name to the title for a sovereign or a military ruler of the equestrian nomads of Central and Middle Asia, known to many only by the notorious Mongolian conqueror Genghis Khan.

The diversity of Asia

The menu mainly consists of Vietnamese dishes, above all, of course, the pho soup, but specialties of Chinese, Mongolian and Thai cuisine can also be found.

Although the Khan does not strictly distinguish between appetisers and entrees, good ideas to start your meal include spring and summer rolls, stuffed dumplings, and tempura deep-fried in fine rice flour. Also the fried sweet potatoes, which are served with a spicy sauce, are an absolute must.

When it comes to mains, Khan once again offers a kind of “Best of Asia” selection. In addition to the above-mentioned pho soups, the menu includes Lu Rou and Mijoté – both a type of casserole – but also wok dishes and fried noodles or fried rice in a number of variations.

All dishes are served on and in high-quality ceramics, which further contributes to the stylish look of the restaurant.

If you are planning to top off your meal with a dessert, you should not miss the homemade mochi. These sticky little rice cakes come in three different variations and are partly coated with sesame and grated coconut or stuffed with sweet bean paste.

The mocha always comes in threes, so sharing is encouraged. If you prefer your dessert for yourself, you should go for the tasty caramel flan.

With its elegant interior and emphatically fashionable atmosphere, the Khan is especially suitable for occasions when you want to impress a certain someone with your sophistication and taste.

Be it a romantic date with your partner, dinner with friends or even a quick lunch with business partners. If you want to make a spontaneous detour to the Khan after a stroll on the nearby Danube bank, your chances are good to find a table at lunchtime and in the afternoon.

But due to the small number of seats and the increasing popularity of the fashionable restaurant, it is highly recommended to book in advance during dinner visits.