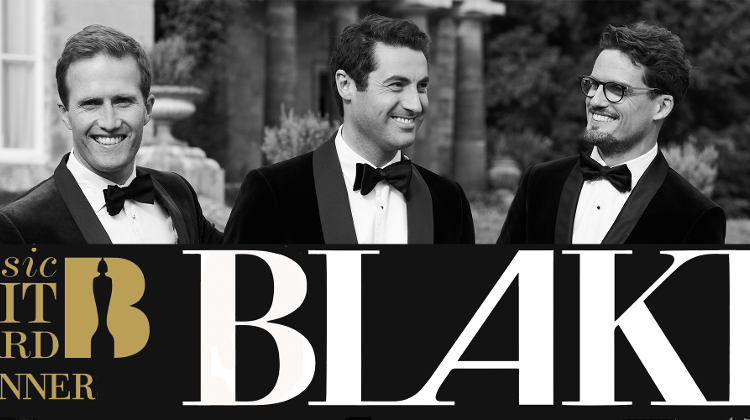 With over a million albums sold, No. 1 hits in ten countries and nearly 150 TV appearances around the globe, BLAKE continue to build their reputation as one of todays most eclectic and exciting classical ‘crossover’ groups.

Their friendship and musical careers date back to their school days, but just six months after reuniting as adults via social networking site Facebook, BLAKE were ready to launch their debut album in 2007.  It was a phenomenal success going straight to No. 1 in the UK Classical Album Chart and taking the pop charts by storm.

With over 100,000 copies of the album selling in just three weeks, the group earned their first Gold Disc. Recognised by the music industry for their talent, the album received the prestigious Classical Brit Award for Album of the Year in 2008 - a huge honour for a group that was still less than a year old.

Blake has travelled the length and breadth of Great Britain and has been lucky enough to have performed at Twickenham, The Olympic Stadium, Wembley, Wimbledon and twice at Buckingham Palace.

Even more of an honour is they fact they have performed in front of HM The Queen, Prince Charles, Prince William and more recently Prince Harry.

They have even performed for royalty in other countries with a very special invitation from The Prince Albert and Princess Charlene of Monaco.

Throughout their career they have visited and performed in some spectacular countries including China, Australia, Russia, South Korea, Taiwan, South Africa, New Zealand, The Philippines and the USA.

In addition to their worldwide touring schedule, Blake also find time to perform and work as ambassadors for their many selected charities, which include, amongst others, Cancer Research, The War Widows Association, The World Wildlife Fund, Clic Sargent, The Prince’s Trust, Variety (The Children’s Charity), MIND, Starlight, The Royal British Legion, Help for Heroes and Walking With The Wounded.

The band continue to do much work for military charities, most famously fundraising for, and performing at the opening of the Bomber Command Memorial in London for the Queen and 5,000 war veterans.

For their last Christmas album, Blake teamed up with Dame Shirley Bassey for an incredible version of ‘The Christmas Song (Chestnuts Roasting on an Open Fire)’ which gained much exposure and was extremely well received by critics.

They were also the only group to be asked to appear on the Dame Shirley Bassey special tributed hosted by David Walliams which was broadcast on BBC on Christmas Eve.   The following year they headlined Henley Festival with Dame Shirley.

In March 2017 they had the honour of being asked to perform at the magnificent event in London to celebrate the 100th birthday of Dame Vera Lynn which was televised.

To celebrate their 10th Anniversary in 2018 Blake released their Anniversary Album in March which shot straight to Number One in the UK Classical Charts and it remains in the charts today.

With their very first visit to Hungary coming up in January 2019 Blake are delighted to be performing in Budapest on 18 January and in Debrecen on 19 January.  Also exciting is the news they are being joined by one of Hungary’s finest singers the award-winning Zséda.

“She’s incredibly talented and we are really looking forward to working together.  We’ve got her on our iPhones and are listening to her constantly whilst on tour now”

“Hungary has a spectacular and rich musical history and it’s going to be an honour to come and perform.  We can’t wait to get over and share some of our love of music with you all.”

Zséda is one of the most popular Hungarian pop divas. Not just a singer, but actress, author, producer, mentor, social pedagogue, former juror of the Hungarian Eurovision Contest; proud owner of many hit songs, gold and platinum albums, soundtracks and full house concerts.

She was nominated and has won all the existing music awards and some fashion awards in Hungary - Fonogram, EMeRTon, Artisjus, VIVA Comet, BRAVO Otto, POPCORN, Glamour Women of the year and Instyle Style Award.

Her song, Motel was on the top of the World Chart Express for weeks.