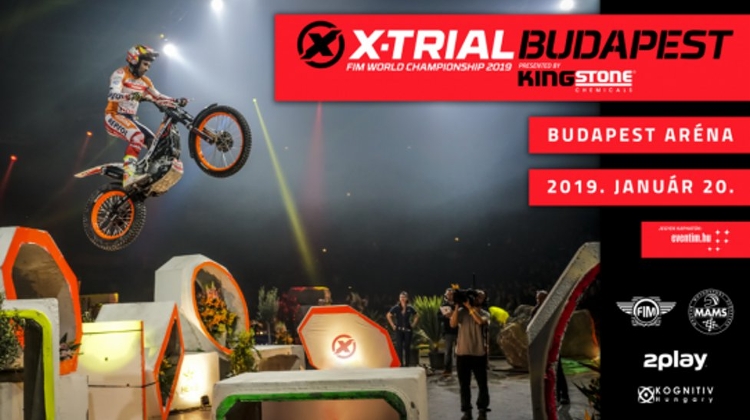 The magnificent Budapest Sport Arena, one of europe’s most emblematic indoor venues, will be the first 2019 host of the world’s top riders.

Last season Adam Raga (TRS) was victorious in what was the first-ever X-Trial Budapest, winning by just three marks over Jaime Busto (Gas Gas) after a close fight which was only settled in the final section.

Absent from the last X-Trial in the Hungarian capital was 12-times World X-Trial Champion Toni Bou (Repsol Montesa-HRC), who arrives in Budapest to start the defence of his title with a victory as his target.  “I feel indebted to Budapest”, explains Bou.

“Last season I couldn’t take part in the last round of the Championship because I was injured, but I’m really looking forward to competing in front of a crowd which last season showed a real passion for and interest in our discipline.  I’m certain that we will put on a competitive show that will be both intense and exciting.”

Alongside the lead quartet from 2018, Takahisa Fujinami (Repsol Montesa-HRC), Jeroni Fajardo (Gas Gas), James Dabill (Beta) and Jorge Casales (Vertigo) will want to take advantage of their opportunity to challenge for podium places having been nominated as the ‘event riders’ for this Round.

Meanwhile Britain's Dan Peace (Sherco) makes his debut with a call-up to complete the field of nine riders. Miquel Gelabert will miss the X-Trial Budapest due to a left ankle injury.

A new competition format will also make its debut in Budapest, with the introduction of a Consolation Final to determine third position taking place at each of the 2019 events.

Staged prior to the Grand Final which settles the top two rankings, the third-place Play-Off will consist of the two non-qualified riders from Round Two fighting it out for the final step on the podium.

Tickets for X-Trial Budapest are available at: www.eventim.hu