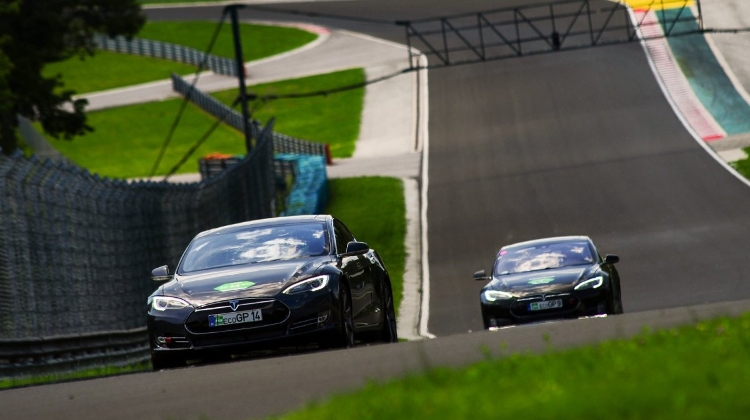 The first electric car race in Hungary, the Eco Grand Prix, was held at the Hungaroring race track on Saturday, producing a genuine last-lap drama, according to a press release.

The race was held as part of the Allianz Family Days, where children had the opportunity to participate in challenges and adults could inform themselves and test e-mobility solutions.

The GP began at 8 a.m. on Saturday, June 1, with 13 teams participating in the competition for EVs. Starting from pole and second position, the VW e-UPs of the MOL limo teams were followed by Renault ZOEs, Teslas, Smart and Nissan Leaf vehicles. According to the press release, almost every car on the race track led the field at some point.

As the nine-hour endurance challenge drew closer to the end, teams got closer to the Tesla Model S of team Zambelly + Thirring, which was in the pit lane getting charged.

When the lead had shrunk to one lap, Zambelly + Thirringʼs Tesla entered the track once more, only to run out of battery power some 200 meters and two minutes from the finish line, resulting in the victory of the team behind them: Tesla Taxi Szeged, with 117 laps on the Hungaroring in nine hours.

According to Eco Grand Prix rules, cars running out of battery power on the track shortly before the end of the competition have five laps subtracted from the result and thus Zambelly + Thirring not only missed the victory, but also a podium place, by one lap.