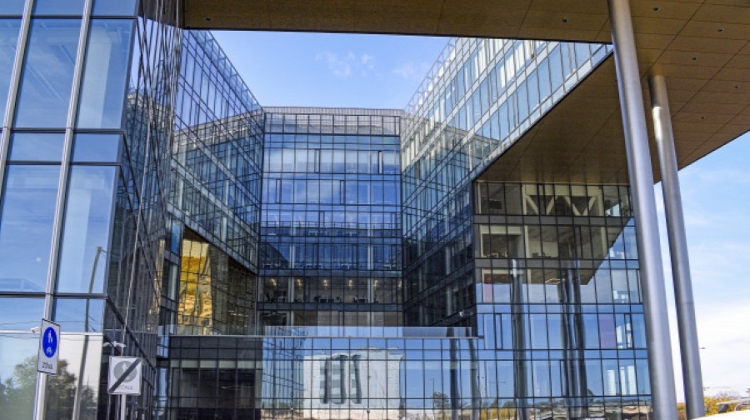 Telekom Headquarters, developed by Wing, was awarded the “Best Office Building” title at the prestigious 21st Hungarian Property Development Awards of Excellence competition, according to a press release.

This year, a panel of independent Hungarian and international professionals presented the awards at the Atrium Hall of Gerbeaud House. Category winners receive the opportunity to represent Hungary at the international FIABCI World Prix d’Excellence Awards.

Hungary’s largest single-block new generation office building is leased by Magyar Telekom under a long-term lease. It was the first in Hungary to obtain a BREEAM Excellent rating under the more stringent regulations introduced in 2013, becoming a building with one of the highest BREEAM ratings in Hungary.

Located at the crossing of Könyves Kálmán körút and Üllői út, it represents a gateway to the city center for those arriving from Budapest International Airport or the M5 motorway.

The building is also easily accessible by car, public transportation and bicycle.

The M3 metro line, currently under renovation, offers a direct and convenient connection to downtown Budapest, while tram line 1, which passes right in front of the building, provides another alternative. Domestic and international lines are available from Népliget Bus Terminal and Ferencváros Railway Station.

The building, offering roughly 100,000 sqm of floor space has been completed following the plans of TIBA Studio architectural firm. The design was tailored to meet Magyar Telekom’s requirements, the press release says.

Building on the success of the new Telekom Headquarters, Wing has begun the construction of its latest office building development project, Liberty Office Building, slated for completion in 2021.

"Dedication, expertise and professionalism are at the heart of Wing’s success," said Noah Steinberg, chairman and CEO of Wing. "We are committed to creating internationally outstanding buildings and thereby contributing to the development of the Hungarian national economy and the environment of our capital that has been built."

"The award presented by the professional jury is further proof that Wing, as the leading Hungarian office building developer is partnering with, and providing world-class solutions to international corporations to meet their unique property-related needs.

Hopefully, we can add a new chapter to the success story of the Telekom Headquarters and its surroundings with the launch of the construction of Liberty Office Building right next door," he added.