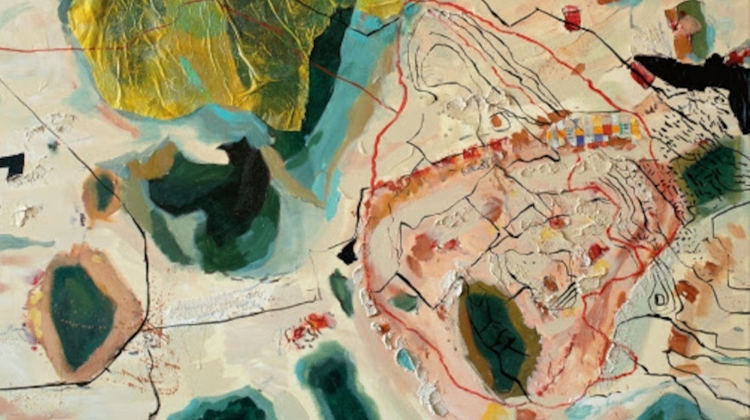 On view until 20 January 2021. In the last one and a half decades Győző Byhon has been honing his artistic technique with great care.

From the point when he opted for the full overhead view for his land- and townscape depictions, he augmented his creativity by using the most advanced means of technology to design his compositions, including the digital camera, the computer, online programmes and even a drone.

His pictures, which could be described as aviatic, resemble aerial photographs with the system of the cultural landscape, the towns, villages, roads and plough lands transforming the earth’s surface into an abstract two-dimensional map. Predominantly depicting landscapes and towns, his works are close to abstract expressionism yet are not non-figurative but mimetic and even contain references to public life.

Towns and cities, the products of a few thousand years of human civilisation, transform and engulf their surroundings. They act like organisms themselves, like constantly changing, sprawling and destructive phagocytes.

For Byhon urbanisation is a Janus-faced phenomenon: it is a cultural process organised at the highest level in human societies, while it inevitably triggers associations with the notion of “Paradise lost” as it is encroaching upon intact nature.

The crises of our times related to civilisation, ecology and war leave especially stark and visible marks on mother earth, whether in the form of an improvised refugee camp, a terror attack in a European city or the ruthless destruction wrought by war in the Middle East. Among other things, the compositions exhibited here stand as mementos of the tragic events we face on a daily basis.

Byhon Győző began studying art in his childhood from András Berecz. He enrolled in the György Bessenyei Teacher Training College in Nyíregyháza in 1979. After graduating from here, he studied at the Hungarian Academy of Art under Károly Klimó between 1984 and 1986.

Then, in 1988, he received an invitation from Adolf Frohner to the Angewandte Kunst art academy in Vienna. His painting was first characterised by the dominance of nudes in a fauvist, expressionist style, while around the turn of the millennia he painted a grotesque series of portraits depicting politicians. In 2006 he produced mainly townscapes from a bird’s-eye-view.