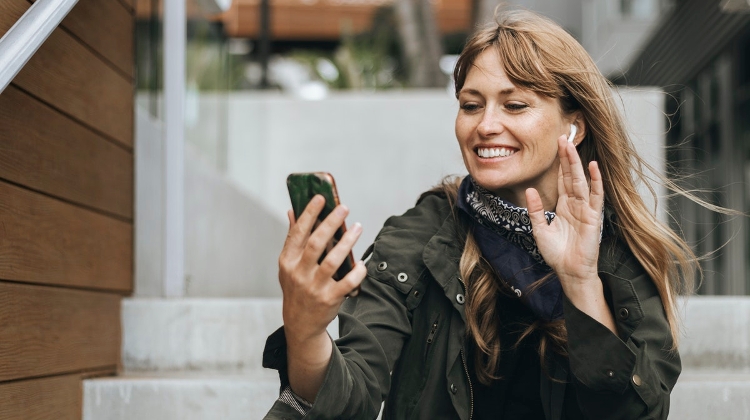 As people sought refuge from the spreading coronavirus in the beginning of the year, they resorted to their phones to a much greater degree to keep in touch with family and friends and stay in the loop at work. Recent data suggests COVID-19 boosted mobile data, and even slightly resuscitated landline call minutes, for the first time in the past few years.

As mobile phones have morphed into smartphones that allow us to binge-watch movies, write email, handle banking and shop via our handheld devices, it is often thought that the days of landline phones and voice calls are numbered, especially for non-business use.

How valid is that point of view now?

Mobile phone networks in Hungary saw a total of 124 petabytes (which roughly translates to 17 million hours of a 4K movie) of data traffic in the first quarter of the year, which is a staggering 69.9% increase as compared to the same quarter in 2019, according to data published by the Central Statistical Office (KSH) in July.

In the preceding two quarters, the year-on-year growth was 56% and 57%, respectively, which indicates the uplift may have been boosted by the extraordinary circumstances that were just beginning to come into play around the coronavirus pandemic.

Some 94% of this data traffic traveled through 4G/LTE networks.

KSH says in its report that the quarterly figures may reflect changed contact habits in the light of the COVID-19 pandemic.

Both mobile call and duration numbers grew by 15% and 17%, respectively, when compared to landline networks, year-on-year.

Although they fell in a quarter-to-quarter comparison for the third consecutive quarter, the number of mobile calls exceeded two trillion, growing by a year-on-year 3.8% in the first quarter.

The total duration of those calls were up by 6.8% to 6.3 billion minutes, which translates to more than 11,000 calendar years.

Per subscription basis, these figures average out at 5.5 minutes a day.

It appears that mobile internet data is biting into the text message pie.

Nevertheless, the length of those calls increased slightly by 2.2% to 922 million minutes, presumably lifted by the lockdown measures as people began to self-isolate.

Conversely, there were 3.2 million landline subscriptions at the end of the first quarter, 0.4% fewer than 12 months earlier, yet slightly more than in the previous quarter.

In 2005, the introduction of 3G made the use of high-quality multimedia applications possible, together with video calls, mobile TV and high-speed mobile internet.

Since 2012, the majority of mobile users have been enjoying the benefits of 4G. According to data from the National Media and Infocommunications Authority (NMHH), in the fourth quarter of 2019, 96.3% of the total domestic mobile internet traffic and 25.2% of the domestic call traffic took place through 4G networks.

Magyar Telekom data shows that annual mobile phone voice traffic is still on the rise. By the end of the year, it is expected that mobile network minutes will reach 10 billion, up from nine billion in 2015.

Mobile data has been on an even steeper climb than voice. In the past half a decade, Magyar Telekom has seen annual mobile data traffic grow more than eight-fold.

In the second quarter of this year (in other words, at peak lockdown), compared to the same quarter a year earlier, mobile data traffic grew by 60%.

Telekom customers have used an average of 5.5 GB of data per month in 2020, which roughly equals to three-quarters of an hour of 4K video.

As 5G technology will be up to 100 times faster than 4G, reaching 10 gigabits per second (more than an hour of 4K video footage), Internet of Things solutions, such as self-driving cars, for example, will become a reality in the upcoming years.

Such speeds, and the fact that 5G networks can accommodate an increased number of devices connected to the same station at the same time, mean the prominence of mobile devices and their usage is only expected to rise further in the near future.