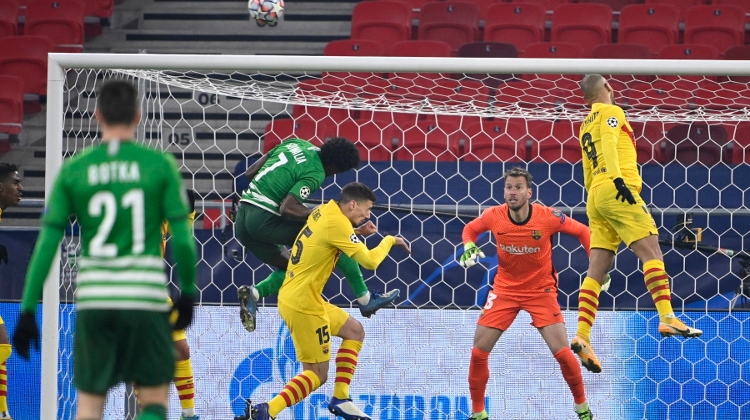 Ronald Koeman's team of stars eased to a 3-0 victory in the Puskás Aréna last night, but Ferencváros again showed their fighting spirit throughout.

Dávid Sigér and Somalia were in the Fradi engine room in central midfield with Tokmac Nguen, Isael and Myrto Uzuni spread across the front line.

Serhiy Rebrov's team lined up in the familiar 5-2-3 formation already seen from the Hungarian champions during this season's campaign, goalkeeper and captain Dénes Dibusz behind three central defenders in Abraham Frimpong, Lasha Dvali and Miha Blazic, with Marcel Heister on the left and Endre Botka on the right.

The opening goal came inside the first quarter of an hour when Jordi Alba's low 14th-minute cross from the left was superbly flicked between Dibusz's legs and into the net by the inside of Griezmann's left heel as he made a diagonal run towards the near post.

Six minutes later, Ousmane Dembele repeated Alba's outstanding service from the left wing with another low cross which Braithwaite poked into the far-right corner of the goal, the final touch of a 33-pass move which became the longest passage of play leading to a goal in this season's Champions League.

Barcelona had totally dominated the match thus far and the Spanish giants stretched their lead just before the half-hour mark when Frimpong was adjudged to have brought down Braithwaite in the Ferencváros penalty area and Dembele stepped up to confidently dispatch the penalty low into the left side of the goal with his right foot.

Ferencváros were limited to very few chances over the ninety minutes, substitute Roko Baturina heading fellow replacement Gergő Lovrencsics's sweet, left-wing cross goalwards in the 73rd minute, only for visiting goalkeeper Neto to impressively gather with the minimum of fuss.

There were several presentable chances at the other end but Fradi held firm and thus managed to record a better result than their 5-1 defeat away against the same opponents earlier this campaign.

Rebrov's team will now seek to prolong their European involvement beyond Christmas by beating Dynamo Kiev away next Tuesday and claiming that Europa League knockout-round spot on offer to the team which finishes third in each group.

Video: The Fall And Rise Of Fradi - Hungarian Football Royalty