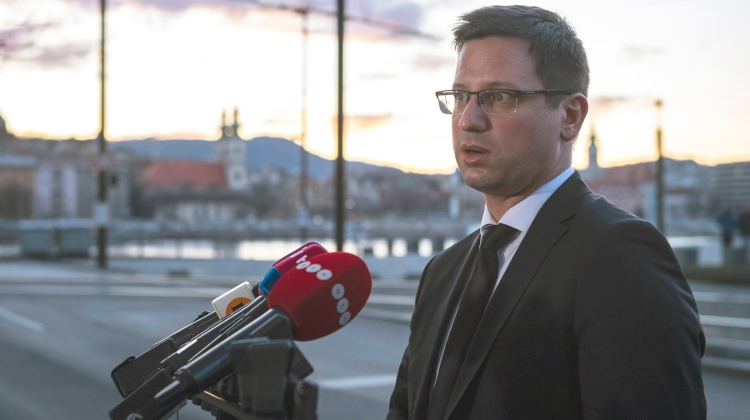 The government is forgiving certain loan repayments this year, including those on baby bonds and student loans, due to the novel coronavirus epidemic, the head of the Prime Minister’s Office said.

Gergely Gulyás said at a regular government news briefing that demand for consumer loans was expected to be high in the current situation, so APR would be capped to 5% above the central bank base rate.

On the topic of employment rules, he said the employment relationship may change as part of a free agreement between the employer and employee, and “creative solutions” would be needed that may entail a loss of income in this extraordinary situation, but the most important aspect of any agreement would be job retention.

He said special rules now apply in the tourism, hospitality, entertainment and film industries, as well as in the gambling, performing arts, events and sports services sectors. Accordingly, leases of non-residential premises cannot be terminated before June 30.

Also, up until the end of June, employers are exempt from paying taxes on salaries, and the health insurance contribution is being capped at 7,710 forints and will be the only employment contribution during this period. Certain other contributions related to tourist operators will also be forgiven, and taxis will have a general tax amnesty until June 30 to be extended if needed.

Meanwhile, he said Romania is allowing in Romanian and Bulgarian citizens returning from Austria, and Hungary will set up a humanitarian corridor for their passage.

In the interest of ensuring the flow of freight traffic, which was being impeded at the border to a long queue of cars, the government is opening new border crossing points at Rábafüzes and Kópháza. He added that difficulties at the Hegyeshalom border with Austria were likely to persist in the long term.

Commenting on the infection rate, Gulyás said the actual number of people carrying the novel coronavirus could be up to ten to fifteen times the number of confirmed cases.

The government will continue to strive to provide accurate figures, but like elsewhere in the world, the latency rate is around 10-15 times the number of known cases, he said, adding that an explosion of cases was likely in Hungary in the next few days. Hungary, he said, took measures to slow down the spread of the virus at an earlier stage compared with other countries.

House sessions are normally guaranteed, even in times of special legal circumstances, though in the current situation it cannot be known how long lawmakers can attend and maintain a quorum. Hopefully, they will be able to,” he said.

Gulyás said that although protecting human life was the most important part of managing the crisis, the pandemic would have a serious impact on both the Hungarian and the global economy. This was why, he said, every minister whose portfolios are affected by the outbreak had been instructed to work out measures to help restart the economy.

Certain sectors like tourism have ground to a halt both in Hungary and across Europe as a whole, he noted, adding that international newspapers were referring to the economic protection plans announced by the prime minister on Wednesday as the boldest action plan announced so far.

Meanwhile, he said the prime minister will set up an action group to oversee the activities of volunteers helping to combat the virus. The new group which will be established in addition to ten already existing action groups, to be headed by government commissioner and lawmaker Máriusz Révész, Gulyás said, noting that ordinary Hungarians have launched various charity initiatives, adding that the government is thankful for this.

He cited the example of private hospitals offering their services and donating digital equipment. Gulyás reiterated that the state had sufficient funding for protective measures.

He said the government has consulted the central bank on possible measures to help small and medium-sized firms cope with the economic impact of the virus. Business closures announced so far are costing the Hungarian economy 140 billion-160 billion forints (EUR 392m-448m) a week, he said, adding that businesses should work to preserve jobs.

Gulyás said he could not confirm reports by Bruxinfo that the European Commission would allocate 5.6 billion euros to Hungary with a view to aiding the country’s response to the virus, adding, at the same time, that he would welcome such a package.

He said the aid packages announced by the EU so far would mainly benefit member states that were less effective in making drawdowns of EU funds. Gulyás said Hungary’s budget reserves stood at a record 492 billion forints, which he said was enough to fight the outbreak, preserve jobs and create new ones.

Asked at the press conference about a supply of protective equipment to be delivered to Hungary from Hamburg, the PM’s Office chief said the government was “fighting for it” and would confirm the information once it arrives. He said the government’s priority was to ensure the supply of face masks to health-care workers. Gulyás added Hungary had a realistic chance of securing a large supply of masks from China in the coming days.

He noted that the government has instructed the operative board coordinating the epidemic response to “clear up the situation around face masks” which involves setting up a clear ranking of beneficiaries.

In response to a question, Gulyás said there was no shortage of medicines, even if some products were not available in every pharmacy. It might be justified to introduce restrictions in the case of some health products and limit the number of items that can be sold per person, he said, adding that no such restrictions were planned in the case of food products.

In connection with testing for the virus, Gulyás said the government would provide support for technical developments and any new type of equipment that speeds up testing or increases the volume of testing. He cautioned that the current tests are 50-70% reliable.

Gulyás said an increase in the number of cases or the speed that the epidemic spreads may justify introducing a ban on people leaving their homes. It would be preferable to avoid this scenario, he added, but nobody could guarantee that such measures would not be necessary in 2-3 weeks’ time.

Amid the current circumstances, it would be reasonable, he said, to expect the opposition to enable parliament to pass laws upholding the state of emergency with the four-fifths majority needed. Hopefully, parliament will manage to continue working and pass the necessary laws, he said, adding that approval of the 2021 budget would be desirable during the spring term.

In response to another question, Gulyás said closures in the trade sector would result in around a 1.1% monthly decrease in growth, and the closure of car plants would add another 0.4% contraction to this. Based on 4% projected growth, if only these two sectors suffer, it would take around two and a half months before the economy slips into recession, he added.