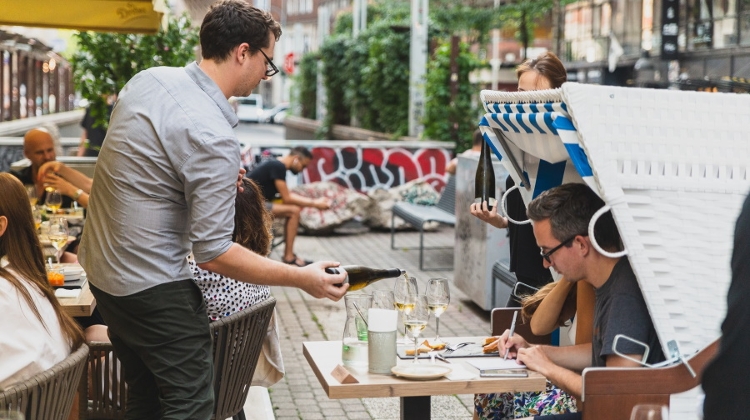 Like many other service-based businesses, Budapest’s previously burgeoning wine bars and wine restaurants have taken a battering from the clampdown caused by COVID-19, but many thankfully appear to have successfully battened down the hatchets, or in their case corks, and come through the other side.

Indeed, there has been a shining light at the end of the tunnel for a pair of Budapest fine wine establishments, the first ever from Hungary to make Wine Spectator’s Restaurant Awards list.

“This year marks the addition of a new country to the Restaurant Awards program –Hungary, which has two first-time Award of Excellence winners, Fiaker and Felix Kitchen & Bar,” says Wine Spectator’s Cassia Schifter, who is the prestigious U.S. wine magazine’s associate tasting coordinator.

In 2020, the Award of Excellence, which recognizes thoughtfully chosen wine lists that offer quality and diversity, as well as compatibility with the restaurant’s style and menu, was earned by 2,289 restaurants, Schifter adds.

Fiaker describes itself not as being a fine dining restaurant, but more of a bistro, and guests are entirely welcome to drop in only for a glass or two of wine.

It is with its wine list that Fiaker stands out, with the territories of the late Austro-Hungarian Monarchy the focus, with the selections made by owner András Kálmán.

“It’s a big honor, it’s not only important for us but for the Hungarian wine scene in general. It’s put ourselves on the map, being included in a magazine that’s not only very well known in the U.S., but also across the wine world.”

While Hungary and Austria dominate Fiaker’s selection, there are also wines from Slovenia, Croatia, Serbia, Transylvania and the north of Italy.

“The award also acknowledges the work of the producers we deal with. You don’t need to go to Bordeaux and Champagne to produce a wine list when there are exciting wines surrounding us. Our goal is to bring more and more interesting wines from the neighborhood,” said Kálmán.

My last wine trip abroad before COVID came was to Croatia, where I was very impressed by the wines of the Kozlovic winery from Istria at the Vinart wine fair in Zagreb, and then thrilled to go on and visit the winery.

I’m now happy to say that I can have a glass of Kozlovic at Fiaker at Madách Imre út 11.

Also, having traveled extensively around the Austrian wine regions, I applaud the team’s choice of Austrian wines, which really encapsulates all that’s exciting about Hungary’s neighbor, which actually has less land under vine than Hungary (approximately 46,000 hectares vs 64,000 hectares, respectively).

Incidentally, the Fiaker team are also behind KisBécs in Buda, which exclusively deals in Austrian wine, and has a lovely garden that’s ideal for summer imbibing.

Felix Kitchen & Bar is located in the Miklós Ybl-designed building that used to house the Várket Kiosk and later the Várkert Casino, at Ybl Miklós tér 9.

It makes my mouth-water to view the wine list that features Hungarian offerings such as Somló’s Kreinbacher, Tokaj’s Balassa, Szekszard’s Heimann, Badacson’s Villa Tolnay, and Frigyes Bott from Muzla in the Felvidék just across the Slovakian border, alongside many enticing international offerings.

For my pocket, it would be as dangerous as visiting the casino that used to be housed there.

“We hope that the first award for Hungary brings us more guests who will appreciate our wine concept,” Máté Horváth, Felix’s head sommelier, told Wine Spectator.

If anything, wine bars might be set to benefit in future as people steer away from crowded, standing-room only pubs and clubs, though that’s not to say that wine bars can’t be like that; think DiVino, especially on a (pre-COVID) Friday night.

The good news is that, now we are in the heat of summer, there are plenty of outdoor options for enjoying a glass of wine.

The aforementioned DiVino, with its selection of wines from the young winemakers of the Junibor group, even has a wine bar on Lupa Beach at Budakalász, a town just 17 km north of central Budapest).

Kadarka Bárka, close to the athletics stadium on the Buda-facing side of Margitsziget has a chilled beach-bar vibe to go with some good wines.

Another pleasant waterside setting with an airy terrace, this time in Pest, is Esetleg Bar & Bistro, which is part of the Bálna (Whale) complex.

VinoPiano has a counter outside near the entrance of the craft beer mecca of Élesztő at Tűzoltó u. 22 in District IX, while the bar itself is in the same building.

Of the garden bars, Kőleves Kert, at Kazinczy u. 37 in the heart of District VII, has a small but very decent selection of wines by the glass.

In the world of fine dining, the Michelin-starred Borkonyha (literally Wine Kitchen), which, as its name suggests, has a strong emphasis on wine, remains closed with the reopening date still uncertain, although sister restaurant Textúra reopened on May 29 with Borkonyha’s head chef Ákos Sárközi in charge of the kitchen.

Meanwhile, it was lovely to see wine lovers visiting wineries again during the Szekszárd open cellar weekend of July 3-5, albeit with COVID clearly considered.

Visitors had to pre-register and come at an allotted time. A relaxed, bibulous atmosphere ensued, yet with social distancing observed, at the Eszterbauer winery.

In Szekszárd to judge wine at Vinagora, Hungary’s sole international wine competition, I caught up with fellow judge and Eszterbauer winemaker, Miklós Klein. I asked him how they had coped during COVID.

“Dolgoztunk,” (“we were working”) was his answer, and then whisked me off to see some of the fruits of their labor. We were joined by owner János Eszterbauer, who was clearly reveling in meeting up with fans of his wines.

He proudly showed us around the stunningly designed and recently completed new winery at Bor u. 8, as well as the plot of 100-year-old Kadarka vines.

A new wine for me from Eszterbauer was “Napszámos” Néró Rozé 2019 (HUF 1,750 from www.eszterbauer-bor.hu), which has a pale purple meets deep pink color, positively oozes ripe strawberries and raspberries, and has substantial body and weight for a rosé, with black pepper joining on the finish.

It’s a bit fiery with 14% alcohol, but has the body to handle it. Ideal for those looking for a fuller rosé, and distinctive too.