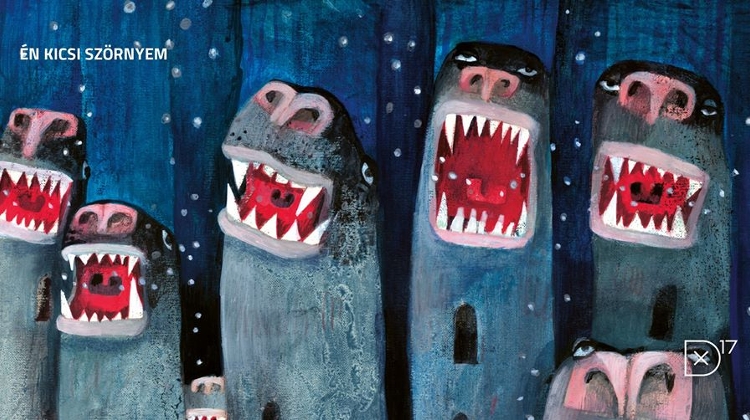 Seen until 3 July. People have depicted monsters as long as they have had fears - that is, since the beginning of time.

By giving them shape, they can face up to them and fight them. Human imagination has been inhabited for millennia by wolfmen, dog-headed gods, aliens, trolls, giants, devils, demons and vampires.

From the outset, their forms have been a mix of the imagined and the experienced: they are hybrid beings constructed from known forms (animals, plants).

They have journeyed from the stories of archaic myths, through fairy tales, and from examples of fine art to the illustrations of children’s books.

The illustrations of contemporary Hungarian graphic artists are at the centre of our exhibition. The first group focuses on those mythical beings that are the best known characters of tales: dragons. In the children’s literature of today, it is difficult to find a destructive, wicked dragon.

The insecure, harmless dragons derived from István Csukás’s Süsü, such as Tihamér and Kajtikó in the tales of Gyula Sipos or Olga Zágoni are the norm. The friendly, helpful dragon of Far Eastern culture appears in the tale of Petra Finy, in which the Golden Dragon is the companion of the White Princess.

The traditions of depicting monsters and imaginary creatures, spanning millennia, live on in the illustrations of children’s books. Such are the mythical heroes’ fights against the monsters (e.g. Hercules defeating the Hydra) or the long list of dragon-slaying heroes.

These appear in classical form in some places, such as the drawings of Krisztina Rényi or Ildikó Horváth, and are adorned with humor elsewhere, as in the drawings of Norbert Nagy.

Besides dragons, devils and witches are well known characters in the ranks of monsters in tales. Their forms are made less threatening through abstraction and the tools of stylized drawing by children’s books illustrators, as demonstrated well by the compositions of László Herbszt.

Hybrid beings present, without doubt, the most liberated sphere of artistic fantasy. Imaginary creatures created from a cross of man and animal or animal and animal have long been figures in ancient pagan religions.

They are the creations of playful fantasy and share a deep tie to the imaginative creativity of children. These beings of various shapes and colors are brought to life by creative artistic liberty in the drawings of Jacqueline Molnár.

The appearance of monsters in children’s literature often serves the purpose of giving shape to children’s fears.

Réka Hanga gives friendly form to Zsolt Adamik’s monsters of Bibe Hill, while the charmingly extravagant drawings of Annabella Orosz recall the lurking monsters of children’s bedrooms. András Dániel’s drawings, on the other hand, neutralize the meeting with the imaginary monsters under the bed with playful humor.

The monsters of children’s literature are doing well, thank you, flourishing and multiplying in tales and their accompanying illustrations. And these are certainly useful monsters, not only because they give shape to children’s fears, but because they embody the boundless fantasy world of the fine arts.