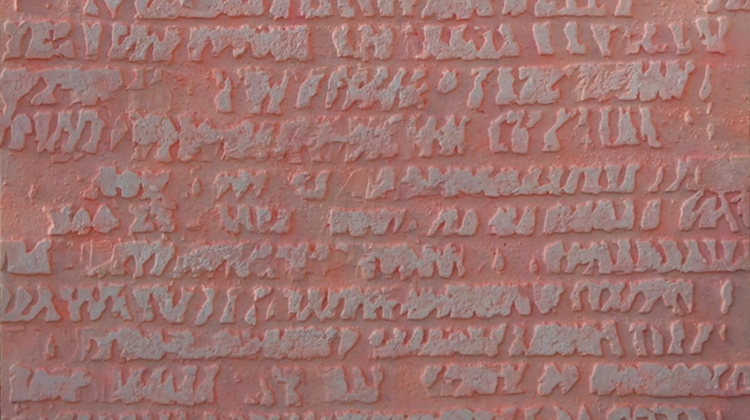 Seen until 28 June. The exhibition in the Műcsarnok highlights the most important stations in Kamill Major’s visual journey through thirty paintings, the earliest made in 1979, to give visitors a taste of his art.

Kamill Major graduated from the Secondary School of Art in Pécs, where his teacher was Ferenc Lantos. He went to Paris in 1972 and enrolled in the graphic art programme of the Paris School of Decorative Arts, where he later taught for several years.

He has lived and worked in France ever since, where he had and still has many friends and colleagues among the foremost Hungarian fine artists living in France, including Simon Hantaï, Judit Reigl, Vera Székely, Vera Molnár, Yvaral Vasarely, Ervin Pátkai, Anna Márk, Lucien Hervé and the list could go on.

It was in this milieu that Kamill Major’s art developed and found its full expression and it is because of this that, despite having some exhibitions in Hungary, he is not widely known here.

From his years in Pécs geometrical abstraction has defined Kamill Major’s painting, the spiritual inspiration for which he drew from the Epic of Gilgamesh, one of the most famous written texts of the ancient world.

The story, which survived on clay tablets inscribed with ancient cuneiform script exerts great influence on artists not only through its verbal force but also its visual system of pictographic signs and symbols.

Major engraves his reliefs not into clay but wooden panels, which are harder to work with; in these works the rhythm of forms are complemented with the equally important light and shade effects. Some of his tablets are monochrome, while he uses two colours in others.

His pictures defined by grid-structures and webs are built on positive and negative surfaces similarly to his crumpled-up and bound, often paper-based abstract compositions that sprang from his collaboration with Simon Hantaï.

Yet, while Hantaï’s imagination is captured by the abstract patterns emerging from tied and painted lumps, Major’s emphasis is on their spatiality and plasticity, the way anthropomorphic forms are born out of crumpled-up and knotted-together materials.