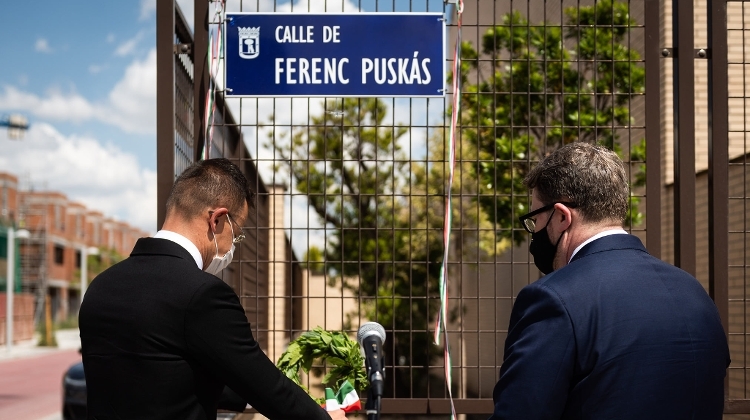 A street named after legendary footballer Ferenc Puskás, a member of Hungary’s 1950s Golden Team and also Spanish football club Real Madrid, was inaugurated in Madrid on Wednesday, 26 May.

Foreign Minister Péter Szijjártó told the ceremony in the Vicálvaro district of Madrid that “we are proud of Ferenc Puskás as the most well-known Hungarian who had a remarkable career in a historic period full of difficulties and challenges”.

The street sign was unveiled in the company of György Szöllősi, the official ambassador of Hungarian football tradition and affairs concerning Puskás. Szijjártó noted that Puskás was still remembered around the world despite having died 15 years ago.

He said Puskás was a link between Hungary and Spain and he expressed thanks to the Spanish people, to Real Madrid and the city of Madrid for nurturing his memory.

Emilio Butragueño, international director for Real Madrid, said Puskás had been an essential figure in the history of Real Madrid and the legendary story of the club could not be understood without him.

Puskás was a member of an “unforgettable generation that contributed to Real Madrid growing into a myth”, he added. Puskás went to Spain after Hungary’s failed 1956 anti-Soviet uprising and he played in Real Madrid between 1958 and 1966.