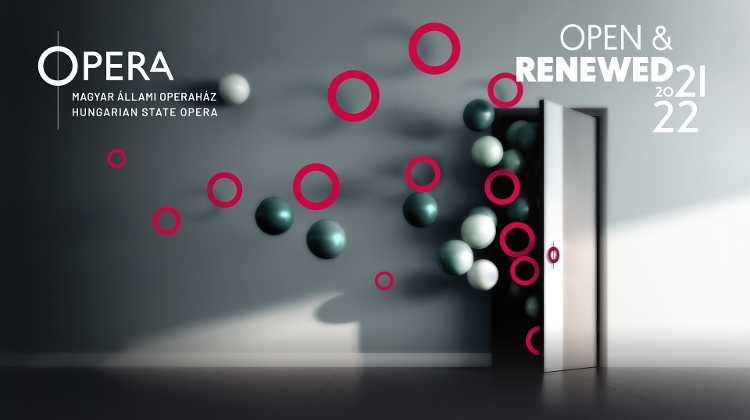 The 138th season of the Hungarian State Opera presents seventeen premieres including seven that had to be postponed.

The three venues of the Opera await audiences with 400 opera and ballet performances, and a further 1300 concerts, chamber concerts, special events, and multimedia activities mean the beginning of a new era.

A number of world-class stars also grace the stages such as Plácido Domingo, who is to return as a singer and a conductor, and opera lovers can meet Erwin Schrott, Patricia Petibon, Matthew Polenzani, Lawrence Brownlee, and Sir Willard White as both Bluebeard and Porgy.

The 2021/2022 season is about reopening and opening again. Both the gates and the possibilities closed by the epidemic will again be opened to opera and ballet-loving audiences.

Popular programmes will return, whereas the benefits gleaned from our recent history will also be preserved.

Autumn will bring the oft-postponed official opening of Eiffel Art Studios, followed by the most important event of recent years, or maybe even an era, in the spring of 2020: the institution’s artists, employees, and audiences can again occupy the true citadel of art, the Opera House.

Following a pre-premier of Carmen by Calixto Bieito, the Tarantino of opera at the Margaret Island Theatre, it will be presented at the Eiffel Art Studios as the first new production of the season.

To commemorate the 250th anniversary of the birth of Beethoven, the rarities König Stephan and Die Ruinen von Athen (originally composed for the 1812 opening of the National Theatre in Pest) can be seen in a double bill in a semi-staged version by Pál Oberfrank.

After a hiatus of six decades, artistic director András Almási-Tóth revives Love Adrift, a comic opera by Ede Poldini with a plot revolving around being in quarantine.

After the restoration work at the Opera House on Andrássy Avenue that lasted nearly five seasons, the moment everyone, including international audiences, have been waiting for is finally here.

Starting with a four-day event between 11 and 14 March 2022, the historic building restored to its original glory and augmented with the most modern technologies will not only be home to productions that have not been performed for quite some time, but several successful recent productions like Andrea Chénier and Don Carlo will also take their worthy place at the Opera House, also known as the Ybl Palace.

General director Szilveszter Ókovács will be opening the Opera House and showcasing the new stage technology with the Hungarian opera Hunyadi László, and Wagner fans will have to add two new premieres to their calendars: András Almási-Tóth will be directing Parsifal, and Géza M. Tóth's Ring production, launched in 2015, will come to a close.

Every year without fail, the Hungarian National Ballet, increasingly praised by international critics, proves that its capabilities know no bounds: it manages to entrance audiences with everything from grand ballets requiring spectacular classical technique to contemporary dance pieces interspersed with acrobatic elements.

Accordingly, the company will be continuing to apply its successful recipe this year as well and will be adding new productions to both of its repertoires. In addition to Wayne McGregor's Chroma, preparations for which have been under way for years, another modern choreography, entitled Sad Case by Sol León and Paul Lightfoot, will also premiere, while audiences with more traditional tastes will be given the opportunity to enjoy Paquita Suite with a new flavour added to the pearl by the legendary Marius Petipa by Albert Mirzoyan, Irina Prokofieva and Tamás Solymosi as well as after a break of fifteen years, Kenneth MacMillan’s lavish Mayerling.

International guest stars at the Opera

Opera-goers may already be used to the biggest names in the international opera world occasionally appearing alongside our world-class Hungarian singers. Some have even become recurring guests, enthralling audiences at gala events as well as in opera roles. Erwin Schrott will become Mefistofele, Peter Seiffert will grace the Opera stage as Parsifal, Patricia Petibon and Lawrence Brownlee will give a concert at the Kodály Park of the Eiffel Art Studios, and Sir Willard White will sing the role of Bluebeard in Hungarian and Porgy in English.

Plácido Domingo will also be visiting us again, playing not only the role of Simon Boccanegra but also taking up the baton as conductor and participating in making a recording.

Conducting the Opera Orchestra, a number of world-class stars will share the rostrum with the most famous Hungarian conductors and some talented young ones testing their wings.

David Coleman has already conducted the Orchestra in Kuwait; he will again be working in a production of Giselle. One of ballet’s most famous conductors, Paul Connelly, will also come to work in Budapest.

Many international conductors will also return to our stages: Stefan Soltész with Die Frau ohne Schatten and “Symphony of a Thousand”, Pier Giorgio Morandi with Verdi’s Requiem, Fabrizio Maria Carminati with La fille du régiment, and Frédéric Chaslin will be conducting his own version of Pelléas et Mélisande.

The Eiffel Art Studios to open

Since its test run, the Miklós Bánffy Stage has already proved itself excellently qualified with Baroque, classical, and contemporary opera productions as well as modern dance pieces.

Audiences were also given access to the Locomotive Hall and Zoltán Kodály Park – the new season will feature programmes in these locations as well. The Eiffel Art Studios that plays an invaluable role of the renewal of Budapest's 10th district is to open officially with a gala performance on 24 October 2021 and will provide versatile programmes for visitors.

Flexible subscriptions for the 2021/22 season

Starting from 14 June 2021, a new discounted ticket type is offered by the Hungarian State Opera.

Between 14 and 16 June, our loyal customers (subscription holders in the 2019/20 season) are served first, from 17 June until 31 August, all audiences are welcome to take advantage of the new system.

The flexible subscription provides customers with the opportunity to view their favourite performances on a preferred date and in a selected seat.