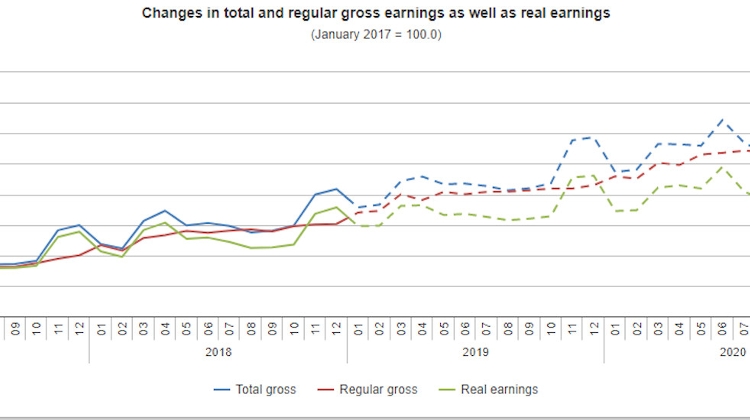 Wage growth in Hungary increased by an annual 10.1% in April, picking up from 8.7% in the previous month, the Central Statistical Office (KSH) said.

Data for businesses and institutions with at least five people on payroll show the average gross monthly wage for full-time employees stood at 440,600 forints (EUR 1,250).

Calculated with twelve-month CPI of 5.1% in April, real wage growth stood at 4.8%. Excluding the 85,700, Hungarians working full time in fostered work programmes — who earned on average gross 85,000 forints in April — the average gross monthly wage in Hungary was 451,800 forints.

The average gross wage in the business sector, which includes state-owned companies, rose by 8.9% to 457,700 forints, excluding fostered workers.

The average gross wage in the public sector, excluding fostered workers, increased by 13.3% to 446,500 forints.

Commenting on the data, a government official noted wages were growing even during the “most difficult pandemic period”. Sándor Bodó, a state secretary of the innovation and technology ministry, told news channel M1 that wages have been growing for 100 consecutive months now.

“We can see that the economy … has survived this very difficult period, albeit with difficulties, thanks to hard work and targeted measures,” Bodó said.

András Horváth, the lead analyst of Takarékbank, noted that wages continued to rise despite the pandemic and a lower minimum wage hike. Employers are forced to raise wages to draw and retain workers, he said.

Gábor Regős of the Századvég Institute noted that wages grew faster in the public sector, driven by targeted raises to sectors such as health care. Other sectors are yet to see a wage hike.

Growing wages in the hospitality sector point to a difficulty to replace employees laid off at the beginning of the pandemic, he said.