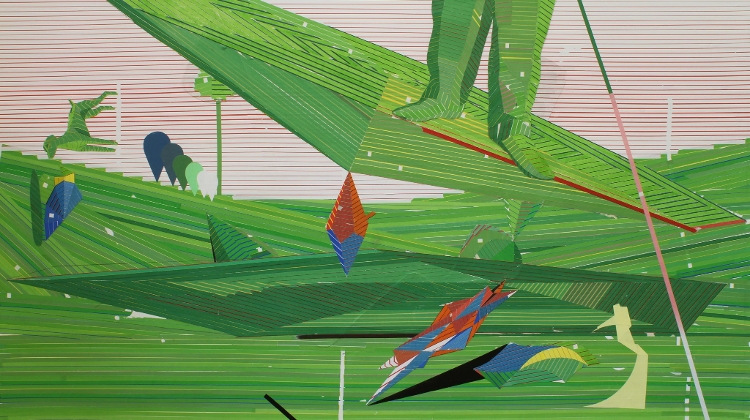 Now on until 3 March. The exhibition gives insight into the psychodynamics of a fictional person who reacts to conflicts with defence mechanisms.

The images are intended to visually collect some of the self-protective behavioral motifs that. They all share the negative capacity of distorting our perception of reality, acting as shadows, from the background.

The works not only provide analogies between these mechanisms and classic hunting scenes, thus creating a set of motives, but they also revive different historic periods and characters. In this way the viewer can look at these phenomena from different timelines.

All this is realized in a relatively symmetrical format whereby the pictures are juxtaposed in pairs.

To locate the theme of the exhibition, I wanted to render somehow the presence of such mechanisms in our society that generally lacks self-understanding and an everyday culture of behaviour.

Her large serpentine paintings were publicly shown in the 2018 Derkovits Exhibition for the first time.

Her first solo (’In Terms of Analysis’) was presented by the Horizont Gallery in 2019. Also in 2019, she won the prize of the Kepesita Collection. She lives and works in Budapest.