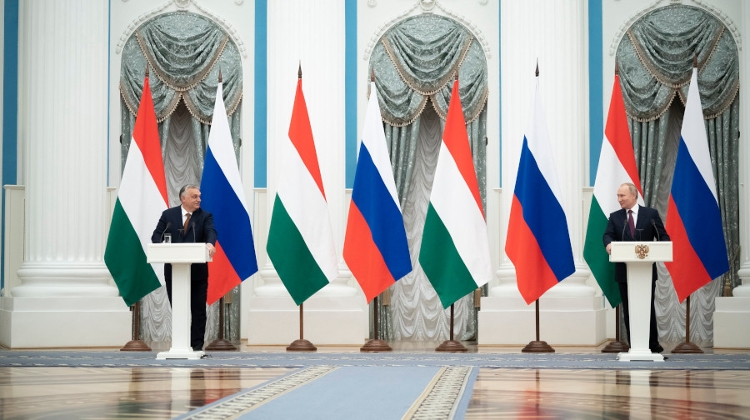 “A peace mission” is how Viktor Orbán characterised his visit to Moscow for talks with Vladimir Putin, saying the European Union was “united”, and not a single European leader wanted a conflict with Russia.

“This is especially true of central Europe,” the prime minister said after five hours of talks with President Putin.

He welcomed the “dialogue under way between Russia and our Western allies”. “What we can offer is the Hungarian model,” he said. Hungary, he noted, is a member of both NATO and the European Union while enjoying “excellent ties” with Russia based on mutual respect.

Calling the situation “serious”, Orbán said there was a “wide gap” between Russia’s security demands and the willingness of NATO member states to fulfil them. But the gap “can be bridged”, he said, adding that it would be possible to sign an agreement guaranteeing peace and Russian security that was acceptable to NATO member states.

He expressed hope that such an agreement could be reached through negotiations in the days or weeks ahead.

Substantive talks on increasing the amount of Russian long-term gas deliveries to Hungary by one billion cubic metres a year can move forward, Prime Minister Viktor Orbán said after five hours of talks with President Vladimir Putin in Moscow.

Orbán told a joint news conference that with Russian gas, the government’s scheme to keep household utility bills low would prove feasible, but without it the scheme would come to an end.

He noted that household gas and electricity prices in Europe, except in Hungary, had grown 2-3-fold. With the agreement under negotiation, “we will secure Hungary’s energy supply permanently”, the prime minister said. As the two countries’ long-term gas supply agreement will gain in importance in the future, volume should be increased rather than reduced, he said.

Putin said Russia was open to further cooperation, and Hungary’s request was being considered. Supplying an additional one billion cubic metres would be easily manageable, he added.

Whereas as Europe would encounter problems with its gas supply, he said Hungary’s supply was secure thanks to its contract with Russia for 4.5 billion cubic metres of gas per year until 2036. Hungarian consumers, he added, had access to gas at well below the market price.

Putin said Hungary had continued to prove its reliability in transmitting deliveries of Russian natural gas. Energy plays an important role in Russian-Hungarian economic relations, Putin noted, adding that Russia had been supplying energy to Hungary for many years without interruption, covering 55% of its oil consumption and 80% of its gas consumption.

He also noted that Hungarian oil and gas company MOL maintains oil production interests in Russia. Putin noted that Russia supplied gas to Hungary under a long-term agreement and that the bilateral agreement has been extended until 2036. “Russia is open to further cooperation,” he added.

Concerning the upgrade of the Paks nuclear power plant, Orbán noted preparations for the project have entered the final phase, and as soon as the last permit is obtained “the next phase of implementation will automatically start, enabling us Hungarians to take the decisive step towards becoming independent in terms of electricity supply,” Orbán said, adding that generation system was on course to becoming climate neutral by 2030.

Orbán said Putin had agreed on setting up a Russian-Hungarian joint venture to be involved in the operation of a container terminal at the Ukrainian-Hungarian border. Hungary’s economy could benefit hugely, he added.

The prime minister also noted that a large vaccine plant will soon start operating in Hungary, and it would be suitable for the production of Sputnik V. He trusted a final agreement was in sight, he added.

Hungary plans to buy Sputnik Light, which it would manufacture, he said, adding that an assessment of the vaccine by the Hungarian authorities would conclude soon.

Putin said Hungary was “an important partner” of Russia in Europe and, notwithstanding the pandemic, bilateral trade turnover increased by 30% to 5.5 billion dollars in the first 11 months of last year, with investments from both sides worth one billion dollars all told.

The president also referred to a joint cultural cooperation programme lasting until 2024 and noted that a Russian cultural festival held in Hungary had been a great success. Putin thanked Hungary for its support for Russia’s organisation of the 2030 World Expo.

Both leaders qualified Hungarian-Russian relations as “balanced, positive and constructive”. Orbán said Hungary was committed to ensuring relations continued on the same path.

Referring to Hungary’s April 3 general election, Putin said he trusted he would be able to continue working with Orbán afterwards.

Prime Minister Viktor Orbán said the Russian economy had coped with sanctions, and he called the policy of sanctions “unsuccessful and doomed to failure”.

He added that sanctions had caused Hungary’s economy greater harm than Russia’s as Moscow replaced Hungarian imports while Hungary lost markets. Several western EU members, he said, were in the same boat.

President Putin reiterated that Moscow had carefully studied the US and NATO response to its security demands.

“It’s clear by now … that fundamental Russian concerns have been ignored,” he said.

The principle of indivisible security involves no one increasing its security to the detriment of others, he said. NATO, he added, had “cheated Russia” because it failed to keep its promise not to expand eastwards.

Further, against Moscow’s wishes, it terminated an anti-ballistic missile agreement and “soon” NATO would place strike weapons in Romania and Poland. The president said NATO was not obliged to admit new members and it should respect the interests of other players including Russia.

He noted that Ukraine had made clear that it was prepared to recapture the Crimea peninsula even by force.

“Let’s imagine what would happen if Ukraine were a NATO member,” he said.

Respecting the interests of all players is the only way to avoid a negative outcome, Putin said. The Russian president agreed on the need to talk about a resolution but added that he was not yet ready to disclose what this resolution should be.