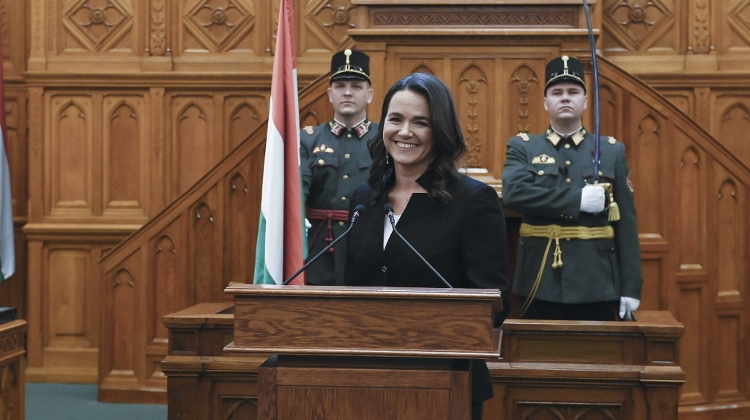 Hungary’s parliament elected Katalin Novák as president of the republic.

Novák took the presidential oath of office and will become the sixth Hungarian president on May 10. She will be the first female president of Hungary.

Novák holds degrees in economics and law and served as an official of the foreign ministry between 2001 and 2003 before becoming an advisor to then-foreign minister János Martonyi in 2010.

In 2012 she was appointed cabinet chief of then human resources minister Zoltán Balog before going on to serve as state secretary for family and youth affairs from 2014 to 2020.

She was appointed minister without portfolio for family affairs in 2020. Novák has lived and worked in the United States, France and Germany and speaks English, French, German and Spanish.

Thursday’s vote marked parliament’s eighth presidential election since the change of regime in 1990.

According to Hungary’s constitution, the president of the republic embodies the unity of the nation, monitors the democratic operation of the state and serves as commander-in-chief of the Armed Forces of Hungary.

The president is elected by parliament for a five-year term and can serve a maximum of two terms.

Novák has pledged to promote peace and hold the constitution as the foundation of her work.

Earlier, she said the upcoming parliamentary election on April 3 would be a crucial moment and expressed hope that voters would not lose sight of national interests and the future of the country’s children.

Novák said she was ready for the task to represent all Hungarians. She said the country’s free will was the basis of sovereignty and family represented its cradle.

“I will never be willing to give up sovereignty in terms of the nation.” Novák said she was determined to become a good president “not despite of but as a result of being a woman”.

She added that being a mother and a wife, she would promote peace, understanding and security. She said she would not allow anyone “to play Russian roulette” with Hungary’s hard-won independence.

“We belong to Europe and Europe belongs to us,” she said. “We cannot change this and do not want to change it,” she added.

Novák said the war started by Russia was “indefensible and inexplicable”. Hungarians want peace and women want to win peace not war, she said.

She expressed thanks to those who offered help to people in trouble.

She said she had visited Transcarpathia last week and added that ethnic Hungarians who decide to stay there were just as important as those that left and other refugees from Ukraine.

She thanked outgoing President János Áder and First Lady Anita Herczegh for sharing their experiences from the past ten years and added that her first journey would be home to her family, and she planned to visit Warsaw as soon as possible.