Hungary Fall to Bizarre Own Goal Against Serbia 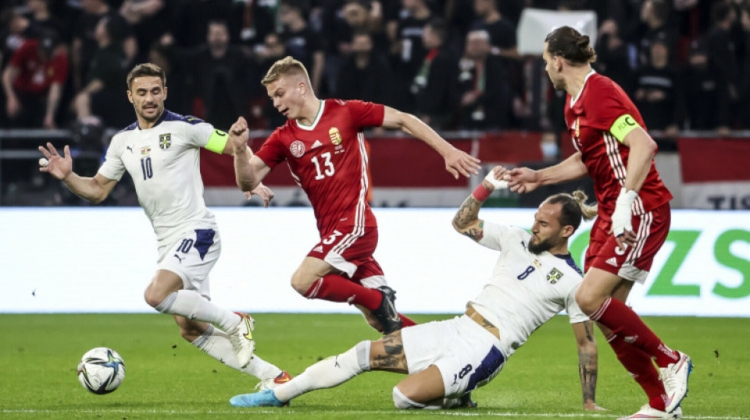 A first-half own goal from Zsolt Nagy handed Serbia their first ever victory against Hungary in a well-contested match in the Puskás Aréna on Thursday evening.

With June's Nations League Division A fixtures firmly in his mind, Hungary head coach Rossi opted for a back three of Attila Fiola and Endre Botka either side of Ádám Lang, stationed behind a four-man midfield of Zsolt Nagy on the left, András Schäfer and Ádám Nagy in the centre and Loic Nego patrolling the right wing.

An even and open beginning to the game saw Hungary threaten first, Sallai's right-footed cross from the left wing headed goalwards by Szalai, only for Serbia goalkeeper Vanja Milinkovic-Savic to palm the ball away athletically and an offside flag to render Hungary's hopes invalid.

Almost immediately, the visitors saw a spectacular goal from Kostic ruled out for push on a defender by Mitrovic and the closely contested nature of the game continued thereafter.

Serbia took the lead in bizarre circumstances in the 35th minute though, a Mitrovic shot from close range being superbly touched onto the crossbar by Gulácsi before the keeper and his teammate Zsolt Nagy contrived to get in each other's way and bundle the ball over the Hungary goalline.

Zsolt Nagy was clearly keen to make up for his part in that concession and he did excellently down the left to find space for a cross which deflected up for Szalai on the right side of the penalty area in the 40th minute, but his volley was well off-target and Nego could barely deflect the ball any closer to goal on its way through.

That was as close as Hungary came to a goal in the first half and the attritional nature of the match continued after the break, neither able to string many passes together or seriously test their opposing goalkeeper.

That was until the 76th minute though, when Gulácsi instinctively stuck a foot out to block Mitrovic's low shot after the Fulham striker had been sent in one on one by Serbia captain Dusan Tadic.

Minutes later, Szoboszlai chipped the ball infield from the right wing for Sallai to chest down and drive low just centrimetres wide of the left post. Substitute Callum Styles then blasted a shot wide from a tight angle as the hosts committed more and more men forward.

That was always likely to leave Hungary susceptible to the counter-attack though, and so it proved when another substitute, Nemanja Radonjic, broke clear in the right channel, but his low effort skidded wide of Gulácsi's right post.

There was one last opportunity for the home team though, Schäfer surging forward, exchanging passes with substitute Martin Ádám and rattling his shot against the near left post, the rebound being volleyed wide by Szoboszlai with the goal gaping.

Thus, Serbia edged to a single-goal victory which they just about deserved, if only for the fact that they had three shots on target while Hungary had none.

Marco Rossi's team will look to improve upon that statistic in their next fixture, another friendly away against Northern Ireland on Tuesday.