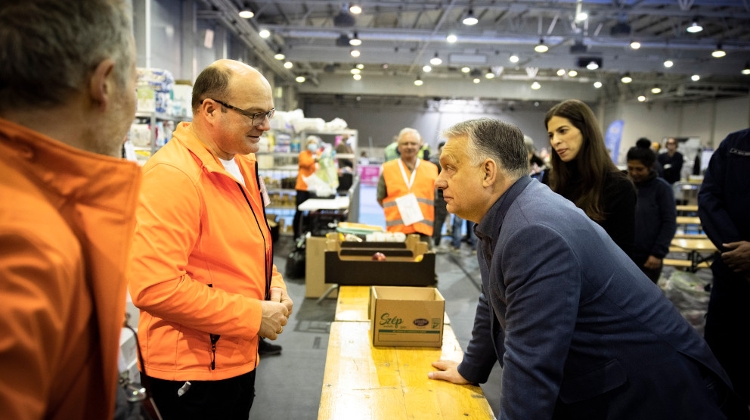 “Dangerous proposals” regarding the response to the war in Ukraine “are on the table”, Prime Minister Viktor Orbán said after talks with European Council President Charles Michel on Monday.

“Dangerous proposals are on the table of NATO,” the prime minister said, adding that certain member states had again floated the idea of imposing a no-fly zone over Ukraine.

"The last week was hardly easy, but this week will be even harder,” Orbán said, noting this week’s NATO and European Union summits. “NATO is a defence alliance,” Orbán said.

“We are capable of protecting — and it is in fact our duty to protect — each other, but it is not NATO’s job to get involved in a military operation outside its territory.” “Hungary’s position is clear: we do not want to send soldiers or weapons beyond NATO territory,” he added.

Regarding Russian energy supplies, the prime minister said the issue had been “settled ten days ago — at least for a period of ten days” when Hungary had made it clear that it did not want the sanctions on Russia to be extended to oil and gas imports because that would put “disproportionately and almost unbearably heavy burdens on Hungary and some other EU countries”.

“It would hurt us more than it would hurt Russia, the target of the sanctions,” Orbán said, adding that Hungary would join certain other countries in opposing sanctions on Russian energy imports, “and we will again protect Hungary’s energy supply and the security of the country’s ability to function”.

Prime Minister Viktor Orbán visited Budapest’s BOK sports and events centre, which has been converted into a humanitarian transit point for refugees fleeing the Russia-Ukraine war.

The government is running the transit point in cooperation with charity organisations, Bertalan Havasi, the prime minister’s press chief, noted. The government has arranged for the facilities to replace set-ups for refugees at Keleti and Nyugati railway stations.

Information points at the railway stations will remain in place, while refugees are being bussed to the BOK centre where they have access to food, shelter and medical treatment, state secretary István György said.

A supervised play area, baby care and information on further accommodation and travel are also available, he said.

Bertalan Havasi said a war was under way at Hungary’s borders and in the past weeks alone, nearly half a million Ukrainian refugees arrived in Hungary fleeing the war. The government expects this number to multiply in the coming period, he added.

The economic consequences of the war and the sanctions introduced pose serious burdens on the Hungarian economy, Havasi said. Extraordinary circumstances require extraordinary measures and the government has decided to request that the EC enable immediate provision of the allocated loan facility under the Recovery and Resilience Facility.

In the English-language letter made available to MTI, Orbán said “the war in Ukraine poses an unprecedented challenge to the Member States of the European Union.

The security risks, the burden of the humanitarian crisis, the economic consequences of the conflict and the negative effects of EU sanctions are to a large extent borne by the countries protecting the European Union’s eastern borders.”

“Extraordinary circumstances require extraordinary measures. Hungary is prepared and stands its ground in the crisis. We have received more than 450,000 people so far who have fled before the war and from the war,” Orbán said.

“We provide humanitarian assistance to those who come to us and those in need in Transcarpathia. We have strengthened the protection of our eastern borders. We are doing all this in the name of humanity and for the peace and security of the European Union as a whole.”

Orbán said that in crisis situations, the preservation of the unity of the European Union and the shared responsibility connecting the member states were particularly important.

“To this end, Hungary only asks for immediate and effective access to EU funds allocated to it, and to be able to use them in a flexible way for the purposes best suited to dealing with the crisis,” he added.

Orbán asked the EC to approve, as a matter of urgency, the Recovery and Resilience Plans, Partnership Agreements and operational programmes of the member states protecting the eastern borders of the European Union.

He also asked the EC to allow rapid, targeted and flexible use of EU budgetary resources by removing pre-financing, co-financing and transferability limits.

Orbán noted in the letter that 30% of the financial support available under the Recovery and Resilience Facility until the end of 2026 is to be reallocated by June 30 this year in light of current economic growth indicators.

The reallocation would entail a loss of resources for all member states protecting the EU’s eastern borders, which could amount to up to 16% of the available grants for some member states, he added.

“This is unacceptable. I call for a review of the reallocation system and to ensure that those Member States that are bearing the brunt of the war crisis and at the same time making a significant contribution to the economic growth of the European Union do not lose EU resources,” Orbán said.

“In addition to the development needs outlined in its Recovery and Resilience Plan, and independently of its approval process, Hungary requests the immediate provision of the allocated loan facility under the Recovery and Resilience Facility for defence, border control, as well as humanitarian and other acute crisis management tasks,” the prime minister said.

“In the current circumstances, these are the most important areas for improvement in terms of strengthening our resilience. The European Union can only provide real and substantial help if it offers immediate and flexible funding for these purposes,” Orbán said in the letter addressed to Von der Leyen and also sent to the president and members of the European Council and the president of the European Parliament.