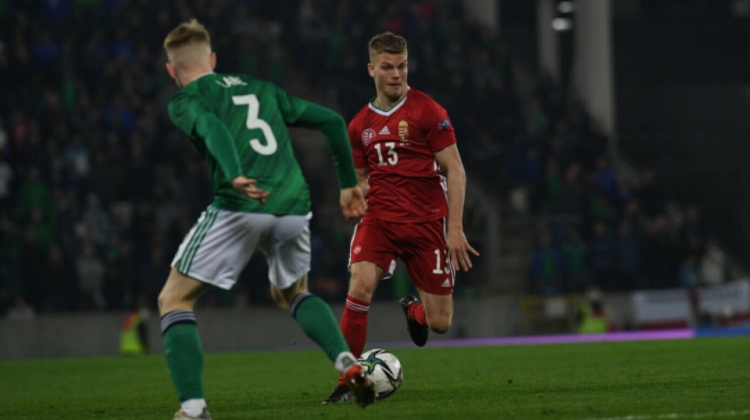 Roland Sallai capitalised on a defensive error to strike a second-half winner for Hungary in their friendly match against hosts Northern Ireland in Belfast on Tuesday evening.

The single-goal success marks a welcome return to form for Marco Rossi's men after losing to Serbia by the same scoreline in Budapest last Thursday.

The first half proved to be an even, if scrappy affair with more chances for the hosts than the visitors. Steven Davis hit Hungary's woodwork after latching on to Zsolt Nagy's mis-weighted pass in the 10th minute and visiting goalkeeper Dibusz was called upon to make saves on several occasions throughout the half.

For Hungary, who dominated possession but found it hard to break down an imposing home defence, Sallai had the best opportunity, but his shot from Loic Nego's cross was well saved by Northern Ireland goalkeeper Bailey Peacock-Farrell.

The Freiburg playmaker got it exactly right in the 55th minute though, seizing on Niall McGinn's short pass backwards, rounding the keeper and slotting unto an empty net to have his team a lead they wouldn't relinquish.

Northern Ireland pressed hard, particularly in the final ten minutes, but Hungary, and particularly an in-form Dibusz, stood firm to secure an impressive away win.

Marco Rossi: "After the match against Serbia, I was more pleased with our performance than here in Belfast, despite having lost that day. We've won tonight, which we deserved (by virtue of our performance) until the 80th minute, but the last 10 minutes were only for Dénes Dibusz.

I've said several times that the position where we have no problem is the goalkeeping area, since we have very good players there.

So many substitutions meant we lost balance, distance from each other and confidence. There could have been more initiative in our game tonight. However, we made some midfield combinations which took us to the opposing penalty area thanks to some very good passes and from which we could have decided the match more than once.

However, we didn't turn these opportunities into goals and thus, we suffered a lot in the end. It's important for our self-confidence that we have our first victory this year, mainly because our next four matches will be very difficult and will be much more like the match against Serbia".