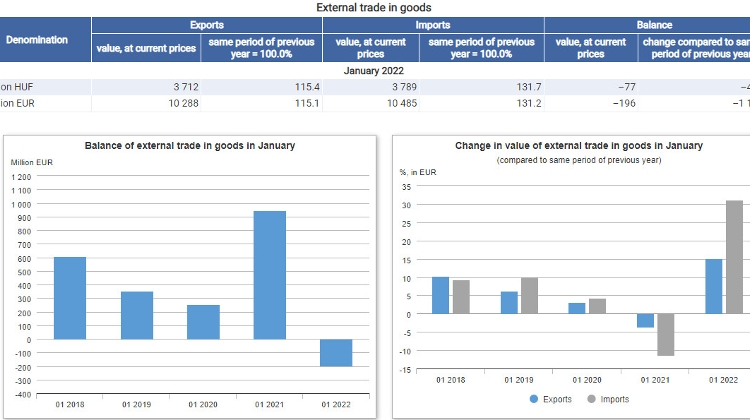 Hungary’s trade balance showed a deficit for the seventh month in a row in January, a first reading of data released by the Central Statistical Office (KSH) on Friday shows.

Hungary, an export-driven economy where trade surpluses are the norm, had a 196 million euro trade deficit for the month, with exports rising by an annual 15.1% to 10.288 billion euros and imports up 31.2% to 10.485 billion.

Analysts said growing imports and the weaker trade balance were in large part due to growing domestic demand and skyrocketing energy prices.

Takarékbank analyst Gergely Suppan said that after the trade surplus fell to 1.9 billion euros in 2021, the war in Ukraine further muddled expectations.

Growing grain prices, another consequence of the war, could offset the deteriorating trade balance but this would be dampened by grain export caps, he said.

Foreign trade could show a deficit this year, which could be balanced by building new capacities in the next few years, he said.