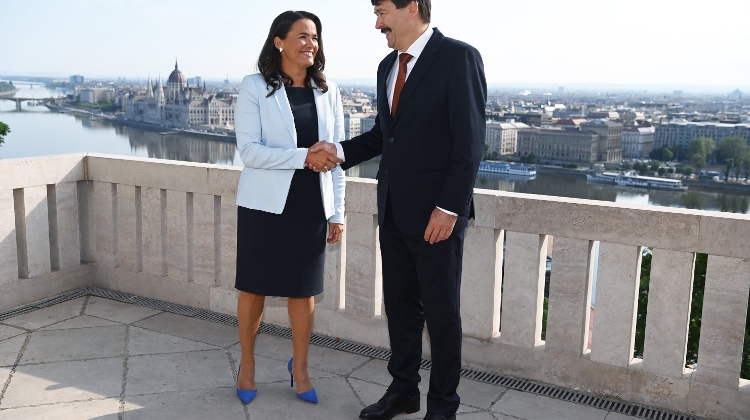 Katalin Novák on Tuesday took over the presidency of the republic from János Áder. Áder greeted Novák at the entrance of Sándor Palace in the Castle District and showed her round the presidential offices and residency before making an appearance with her on the presidential building’s balcony.

Parliament elected Novák president on March 10, and she will be the sixth president since the 1989/90 change of political system. Novák will be sworn in during a ceremony on Saturday. Hungary’s president fulfils a largely ceremonial role.

According to the Fundamental Law, the president expresses the unity of the nation, protects the democratic functions of the state, and is Commander-in-Chief of the Hungarian Armed Forces.

The head of state is elected by the parliament for five years and can fulfil no more than two terms of office.

Katalin Novák, who will enter her office as Hungary’s next president on Tuesday, has presented her staff referring to its members as “excellent experts”.

Gergely Ekler, former secretary of state, will head the presidential office, while Tamás Schanda will be the chief of staff; Kristóf Altusz, former ambassador to Denmark, will be in charge of the diplomatic corps, and István Manno, ambassador to Ireland will oversee presidential protocols, Novák told MTI.

Novák will officially be inaugurated to her office in an ecumenical service in the Kálvin Square reformed church on May 14.